No sleet, or snow - the end of the world as we know it.

The world will probably end today. They're tagging lambs, and it is not rain, sleet, howling gales and utter misery for man and beast (yes, this has been true in the last few days of the tagging. We had 'splushy ice' landing on the window the day before yesterday. Snow I think, lumped and melting. Just a delight to the hands trying to hold that lamb.) But today is glorious. Something must be seriously wrong. James is working with them, and it's the sort of experience any young geek should get a bit of. In most cases I suspect that would hasten them back to their air-conditioned cubicle and make very sure they never ever left it again, but at least they'd know where their food came from, and what sweat and hard conditions are a part of seeing it is there.

Pig killing is due tomorrow, so bacon will be being made. Starvation (or at least the end of the bacon) is averted...

I've been prepping the area for the container that Peter is kindly giving me, that will be my workshop. 12 concrete blocks have been collected from the tip. Actually... a lot of concret was collected from the tip. I went scavenge crazy. It happens to the best us. I carried off all that lovely garbage, triumphal in my gung ho tip looting. I'd have taken more, only the poor ute was sagging. There are now old paver step where hitherto there was a need for that thing I do not have - AKA long legs (no not money, or readers. Those are other I do not have :-)). I must say the workshop will be a vast relief to all, especially me, and Barbs, if it'll keep the nets and rods and spears and lights and spades and... and... out there. It'll need roofing, but I have some scavenged tin for that.

Barbs has had man-flu. Yes, we're an odd family. I despite the beard am not very prone to man-flu. I'm not up to it and settle for being slighty snuffly and grumpy and continue much as normal (because the grumpy part is normal anyway). Barbara gets flattened by it. Anyway, she's a bit better today, which is good.
Posted by Unknown at 11:12 AM 1 comment: 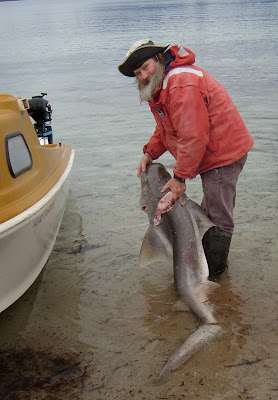