It's been an interesting and busy week - the trailer has worked hard. The blue slug pulling moans that she has worked harder still. There's a little fairness in that - I drove her up Jamie's horrendous hill to fetch an old garden shed, that will become our generator shed. Up there we had the interesting times of pulling the shaft out of the hydraulic ram... a task that took another tractor - to put an O-ring in. It's funny how huge powerful machine rely so much on teeny weeny bit of rubber. I mean you just have to look at the disasters born out of rubber failing. Anyway... all achieved with a lot of brute force and ignorance (hey it's what I'm good at. Stick to what you're good at.) And then it leaked more oil. So rinse and repeat with a bigger O-ring.

Anyway, with great care I trundled the wee hoosie back down the hill. And then to the farm, where I got very brave driving to where I thought it should live... (2 wheel drive blue slug, and a trailer.) 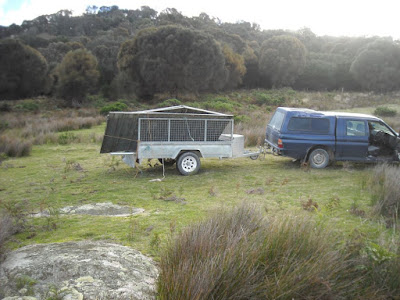 As I am writing this you can gather I am not still stuck up there.

I'd no sooner got back before Barbs called to say could I bring the trailer, one of the builders had kindly offered us some old internal doors he was replacing. Had to be done right now. So we fetched and loaded all those, took them out to the old house we will be moving onto the farm.

The next day I went to my friend Peter's place with the trailer to pick up some fence palings for the battery box... well. In a manner of speaking. The fence palings are still attached to fence, and we loaded that in in sections. I've been reducing it to palings and 2x4, with added scorpions for flavor.

Far too much of my non-writing life revolves around vehicles which I have a magnificent hate-hate relationship with - especially Barb's red rocket, which has been an unremitting lemon with horrible brakes and terrible thirst, to say nothing of her many other fine characteristics, like the corroded fuel line, power steering leak, various burst water hoses, corroded fittings, stuffed electronic bits, and many other minor fixes. Hopefully this passtime will improve as we just replaced it with a Diahatsu Pyzar for an into-work car. It is 18 years old but new to us! It used to belong to a dear friend who died just a few days short of her 90th - so one owner, a little old lady who drove it to church on Sunday- actually is accurate. Poor little car. A hard life awaits it. As you can see it has no roo-bar - which is near fatal around here. 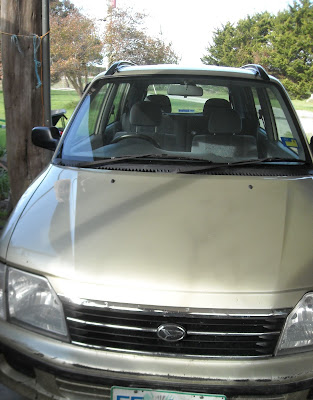 So I wrestled the one off the red rocket. It may be worth more than the rocket was. It had mag wheels I plan to keep for boat trailer wheels. Otherwise I won't miss it. I spent a good few hours cutting some heavy steel plate and drilling holes in it for brackets for the roo-bar for the Pyzar. I need lessons on how to re-sharpen drill-bits.

The brown ute has been having hiccups. That's what it feels like anyway. It farts and stutters and jumps around, and nearly dies. Stop, shake the fuel filter, and hey presto, all is well... sometime for 50 yards sometimes for twenty km. I replaced fuel filters... and it went away. And then started again. So I tried again. And again. Cheap filters I ordered in bulk, fortunately. (cheaper for 5 than 1). Alas I am onto the last one. I figured it might be rust in the tank (the brown ute stood, undriven for about 2 years. So I spent time draining the tank, filtering the petrol, filling the tank, draining the tank, filtering the petrol. draining the tank, etc, and getting this really manly petrol bouquet. My darling wife said 'you stink.' No appreciation of the cologne... There wasn't much that came out of the tank, so I dunno. Haven't tried driving it yet.

Anyway, tomorrow I must take the trailer with a few poles and some scrap timber for the tractor's temporary resting shed to the block and start at least clearing the spot. Next is a lot of hole digging - framework for the solar panels, and the foundations fro the little shed, and putting in four poles for the tractor-port - I have a hand auger but it's still quite a job. I'll bring back a load of firewood, and then on Saturday fetch a cupboard with it... The blue slug I hope survives. It now has this front-tow-hitch which I love. I still suck at reversing a trailer, so with so much trailer use, a serious blessing.
Posted by Unknown at 9:32 PM No comments: