I'm slowly on the mend, having been decidedly unwell for a while (and yes, getting older in the middle of it. Weird how a year can pass just in a day :-)).

We're definitely into the starving months (when spring veg aren't quite up) and I am regretting not having put more effort into my brassicas (we've always done well with brocolli. Not this year). I think by the time summer comes we're going to be very very sick of swiss chard (sliverbeet) and fennel, and for some reason, leeks. A few asparagus have been eaten, and the Artichokes plants are looking 1)fantastic 2)okay 3) a bit small 4)too small 5) too small 6)deceased (yes I have 5 plants) Still we still have frozen apple and frozen tomato and lots of dried apple, and some other fruit. And I have been getting enough Cape Gooseberry to eat off the plant. That's it for winter fruit, so that is quite relevant.

August was just generally windy and horrible - barely got to sea at all, thank heavens for shooting. We still have loads of meat, it's just fish and shellfish that are at historic lows. I have a new rechargeable yacht spotlight to try for wallaby. We're still cutting firewood - but the ground is now so boggy as to cut me off from my favorite she-oak patch - a pity it burns hotter than most
Posted by Unknown at 9:07 PM 7 comments:

Well now, Barbs and I have somewhat ill, but I hope on the mend. Some kind of gastric flu at a guess. Thank heavens for two loos. So there hasn't been a lot of excitement unless you consider the scramble for the loo the sort of thing I ought to write about.

But tomorrow may be different :-)
Posted by Unknown at 8:32 PM 4 comments:

We had a bitter frost last night, which did the poor potatoes no good at all. I really need to get spring plants going but it's been wet and cold.

Barbs had brought home some sandwiches the ants had got to from work. I gave them to the chooks and you've never seen such a scene -- 4 sandwiches - 8 pieced of bread, and three chooks. Plenty for everyone... except what she has got MUST be better than what I've got. Each of them running off with a piece... dropping it and running after the other, and then so the third drops their piece and runs to steal the one dropped. Pieces get trampled lost, ignored, while they fight and squawk over much smaller scraps... Honestly, it's just like government in action ;-) Still they thought it was Christmas.

I sliced two of my fillets of smoked gravadlax, and froze two whole. It's just a touch salty the trout fillets were thinner than I guessed. Still, it will be delicious on fresh brown bread with a dash of black pepper for a dinner party some day. We some with a few tiny fresh asparagus spikes from the garden.

I honey glazed a large smoked leg-chop yesterday, and grilled it and sliced it up, served with slow cooked leeks and pumkin fritters and home made apple sauce it was very good (if yes, you guessed it, a trifle salty.)
Posted by Unknown at 8:28 PM No comments:

I have a cat - La Duchesse - that seems to have decided she has a serious pechant for gravadlax. She stands outside the fridge and meeows at it, and gets seriously upset when I take meeeolk and not meeowfish out of it. I also had my little Robin-cat go missing this afternoon, which I noticed just after I had got in with a load for firewood, and only just beating the sudden storm and lashing rain in. Now she is a fluffly beautiful kitty of not much brain... okay, she's a woos, and about as bright a sun - of a distant galaxy far far away. When she was a little kitty, they said that when you're beautiful you can be bright, but it is not necessary, and she took this to heart. She seldom goes more than twenty yards from the house, but is quite easily frightened, and not fond of extreme weather. When she's frightened - by for example a clap thunder, she runs for safety. Only because she's a rocket scientist, she doesn't always choose the right direction. So when I came in... I check the cats and dogs, and Robin was AWOL. So out in the rain and wind I went for a half hour search. Came back in, talked to Barbs on the phone, and lamented the loss of our fluff-brain...

She came out of wherever she'd been sleeping and ignoring me, about half an hour later. Informed me it was supper time. She was bone dry (which I was not) One of us was fluff brain. And it wasn't her.

Barbs will be home weather permitting. The cats will be relieved. The quality of service they've had is appalling.
Posted by Unknown at 8:24 PM 1 comment:

Hand slicing 8kg of bacon ishard work and makes you smell like you smoke 80 a day... 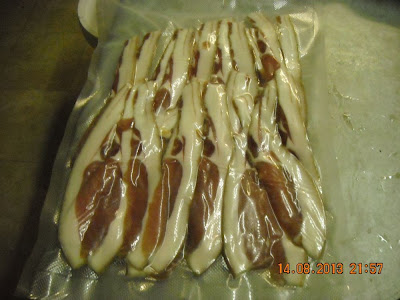 But it does taste good.
Posted by Unknown at 10:01 PM No comments:

Hmm. How do you get blood off the carpet?

No,I haven't killed Barbs, or the cats, or dripped 'roo on it - cat killed a rat messily on the white carpet. Barbs is away in Lonnie for medical stuff (which,to our vast relief is negative, fine 100%. Sorry no will to post earlier, all is well) and then off to visit our younger two on Philip Island (what is it about Islands and the Freers?)and I am coping by eating bacon and drinking a glass of wine. As you may gather the bacon came out well.

It's raining snot and blowing misery here, and I feel rather like bouncing off walls. I was out planting onions and more brocolli in the rain earlier. I shall doubtless catch pneumonia and die to celebrate! ;-)

Anyway,I did do some weeding, much needed, and made sausage mince...pork, garlic, thyme, salt, sundried tomatoes,sweet fortified wine and then could not find the casings, so we had sausage patties this evening. I found them a little too salty - which is a world first (I often over salt, but only in other people's opinion), so I'll add a little more meat and maybe a little a little more garlic. The vampires around here are dangerous.

I did eventually get the list complied and it involves silly things like getting the seed trays ready... and going through my seeds. Spring is creeping towards us, but on leaden feet right now.
Posted by Unknown at 7:50 PM 1 comment:

In all, about 40 pounds of bacon (which will reduce as it loses moisture) and about 10 pounds of gammon, 2 small hams and about 5 pounds of sausages. Oh and some words. And that's what we made today :-) Now we wait to see how it all comes out...

Posted by Unknown at 8:47 PM No comments:

In which we move towards bacon

The pig is now pork and hanging. It was quick and while she was gobbling with delight, which is the way it should be done, in my opinion. She weighed 52.5Kg. The next step is to turn as much as possible into bacon. So any good bacon making recipes will be received with thanks.

She was very fat - which is tolerable for bacon

I'm not too sure which parts of the pig can be made into bacon. I think the hind legs not, and forelegs. I don't want to do hams right now but was wondering about slicing the leg and curing that as sort gammon steaks? I have until tuesday to decide... I will probably cure the hocks and smoke them.
Posted by Unknown at 7:26 PM 6 comments:

Well, it's another day when it is easy to understand why Flinders doesn't have the population of Guam or Barbados... for which I am very grateful. The wind is blowing off snow somewhere, and bringing flurries of rain. Of course the sheep are lambing.

I am still climbing out of this tooth thing, and I suppose post-partum depression with the next book done, and starting on the next. There are a few other stresses going on, but the less said the better. Anyway... my fiendish plot (no. 3256) for warming the house that we will eventually live in 1)insulate, 2)insulate 3)my hangi theory - which involve shutting off the typical hollow under Australian wooden houses, putting some form of heating - most likey water pipes from a hot reservoir which will heat all day around the slabs of sheet granite, which takes time to warm up during the early part of the evening but will slowly re-radiate. Good pie in the sky, anyway :-)
Posted by Unknown at 7:51 PM 1 comment: