The House is sold!

Well, the bridges are burned, it is too late to turn back. In November we will be homeless. I am very excited and can't wait to arrive on our new island, but I am very scared at the idea of leaving all of this behind!!
Posted by Barbs at 6:44 PM 4 comments:

So this is what they tell tourists...

Tired and sick and a little sore today - no major strides towards the goal - but this is tourist site, which has some lovely pics.

There are some interesting things for the migrant on this site. One of them is that there is no form of public transport.
Posted by Unknown at 3:52 AM 1 comment:

This flu has got me by the chest. One of the things we're going to have to learn are a whole bunch of new trade names for old remedies. What a good mucolytic is. What a good expectorant/bronchiodilator is. And I suspect we'll have to leave out first-aid kits behind - certainly for the flight over. I like to have those on hand for climbing particularly. Does Australia run to Friar's Balsam - that pongiffereous sticky brown goo and aid to jamming and reducing skin loss? The cliffs (some seacliffs) on Flinders appear to be ryolitc (sp?) granite. not sure how jammy that'll be - Tas has some great fluted dolerite columns - especially off the central plataeux and the sea-cliffs down South East. That's going to be fun part. Opening new routes... and remembering not to pronounce route in the South African way.... 'root'. :-)
Posted by Unknown at 2:57 AM 4 comments:

Not in my pool please!

OK in the quest to learn Australian sea-food I find myself at page 596 of Stephanie Alexander's The Cook's Companion. Encountering Pipis. Which are not quite what I assumed a million French tourist were doing in the sea at Nice. Which my further research tell me one may use a rake to harvest in South Australia... but although I may gather them in Tasmania, there's a nix on rakes. Now I've dug for Donax serra (white sand mussel) with my feet, at night, chest deep in the freezy waves of Blouberg strand. Sometimes your toes feel a lump that's a sand mussel, and sometimes a lump that's a crab. Fun! I've dug with my hands for another clam species up at Saldanha (v.different habitat- just inside the very small ripple top of tide ripple.) Where doth the pipi lurk? and how do you draw it from the briny? with offers of a walk or discussion of shoes, of ships, of sealing wax, of cabbages and kings... ?
Posted by Unknown at 8:06 PM 6 comments:

When it comes to the road less travelled I think we're gifted, postively gifted, at choosing br'er rabbit's bramble patch and somehow kidding ourselves it is a path, if not quite a road. We got accepted to Oz on a 124 -talent visa. No one applies for that one. The migration agents didn't even know it existed, let alone what was needed. That meant, while rivers of South Africans flowed off to Oz mostly on iirc 457's we had no one to ask, no-one to look at and say 'oh, it took them 3/6/9/12 months. ' We had no idea of the probability of our getting it, or the time frame. Impossible to take pre-emptive steps. Just running blind - not my best. Just about every step was a learning one - for everyone including our examining doctor.

Then of course - having cleared the hurdles (and seriously that particular visa is probably very few people's best bet) which were many complex we couldn't just decide on one the standard destinations - Sydney, Perth, Melbourne, Brissy etc. where we'd be following a well-beaten track and almost certainly be able to have contacts and friends on the ground to see us through the integration/settling phase. No. WE had to set our sights on a place that no South African has settled. That damn few people even know exists. And thence of course a whole set of new learning. Like for example moving costs - to Melbourne R xyz, to Flinders R xyz times two. Why? they're 300 km apart for crying in a bucket. So moving 10 000km costs Rxyz and 10 300 twice that. There HAS to be a cheaper, better way. I am certain there is. But we can't exactly ask the people who did it before us...

Then there is the issue of well, where do you stay? Any of the normal destinations and you'd have a chance of scrounging a bed from a previous migrant friend/aquaintance for a night or two -or a b&b, and then renting short term - months - until you found a house. The local contact could tell you what was a good area, price, etc. And that's where your furniture will go - either your short term rental or your home.

Uh. Don't know anyone there. B&b's a plenty - at a price. Houses to rent for months? what? hello? - especially when, like now, we don't even know when we're going. And then of course we have no idea at all whether we're getting a piece of land, a good shed, or a house. The former two are more likely - in which case what in the hell do you do with a lot of furniture - mostly old and loved?

Hence the container idea. Maybe we just buy one, and then we have shed of sorts...

And your mind keeps bouncing around - from containers to fish soup - which could be a bad experience. I've been peering at recipes. Experimenting. I've been fishing for 45 years - I can probably catch something, even though the locals will lick me 16 ways to breakfast (never underestimate local knowledge, and never go in, as an incomer, assuming you know more than f-nothing). The Portuguese one made my blood freeze... shudder, long boiled fish. I barely boil anything, except very briefly. More on the various training food experiments next time.
I guess I could always boil fish in the container... LOTS of really vile soup anyone?
Posted by Unknown at 5:58 PM No comments:

Out with the Old 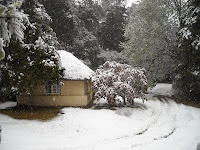 This is what we are moving from. (That is Dave's study, not the whole house!)
Posted by Barbs at 12:16 AM 3 comments: