Well. today has brought 1)a really terrible night's sleep (I seem to have some sort of bug, just enough to make me feel nausea, sick and lousy) 2)The lawnmower-beastie (done, in 2 hours) and 3) the ruins of a dead trailer, rescued from an ignominious death by rust in the tip. It has 2 working hubs, and a working winch, and a tow-hitch, and a space for a jockey wheel. The rest is scrap, due for the tip, but that's a good start for the zoodiac, and as a trailer, which we don't have. Human Magpies... And now... to work on the book.
Posted by Unknown at 4:22 PM No comments:

A night that had seen rain

Ok so I haven't been posting a lot, because I am trying to write a lot. 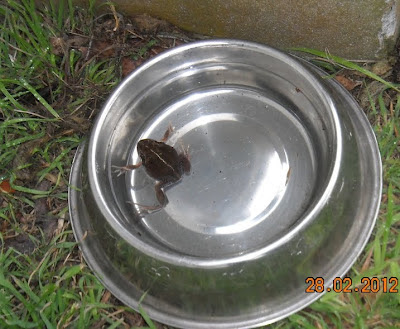 even getting up before this to do it. We had heavy rain last night - about an inch I think... which left the dog bowls with an inch of water... and a new occupant. 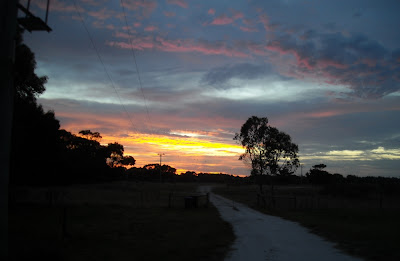 Wednesday was seriously unimpressed. (it was her bowl).
Posted by Unknown at 2:35 PM 1 comment:

Hmm. Yuck. Blogger has a new posting format. Today I had a passing lesson in the stupidity of sheep. Norman borrowed a life-jacket from me, and made a comment about needing to move the sheep from one paddock to the next (the other side of the house). He was off to the fishing competition, so I said could I help out. He said well, if I could just open the gates (a 2 minute hop over the fence from our place, and 5 minute three gate drive otherwise, he'd be grateful. They'd drift, and if not he'd chase the rest around this evening. When I got there I discovered their water was overflowing, so later I came back with a few tools to try and fix it. About half of the 2500 sheep had drifted down the lane-way and into the new paddock... the rest were being sheep. So Barbs and I thought we'd nudge them toward the gate. My word. Sheep are really, really dim. And... um they follow each other like sheep. They ran around in circles rather than go through that gate, into the lane-way, where they could see that terrifying thing... NO other sheep.
Posted by Unknown at 8:45 PM No comments:

The cave at Stacky's Bite. 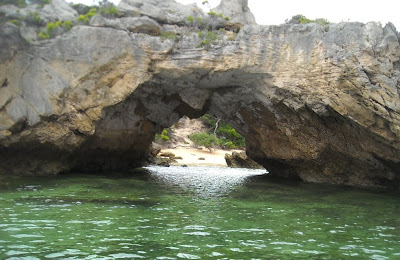 Sometimes it takes a lot to beat something simply beautiful. And this applies to food too. 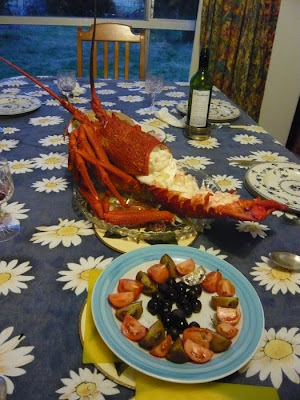 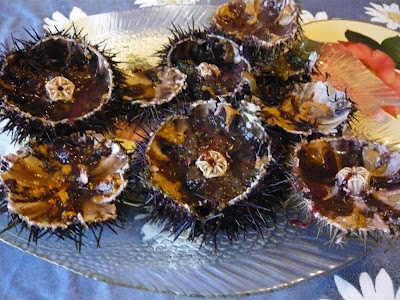 Posted by Unknown at 7:09 AM No comments:

Blogger is being very otherwise and won't let me edit my posts. If this continues, we'll just have to shift to another platform.

Anyway - this is the link to Crawlspace for those of you it won't work for.
Posted by Unknown at 8:52 PM No comments:

At about mid-day we had a yapping and yammering from the front garden. So I went to have a look -- to find Puggle and Wednesday had cornered a large wallaby that they'd got down and were now engaged in biting in as many places as possible. They'd managed to bite a hole in its side - but not I would have thought, anywhere vital. I finished the business with lump of wood and cut the creature's throat. The wallaby was actually bigger than Wednesday so I was surprised -- I would have thought it would kicked the dogs away, and possibly done them more damage than they could do it. The cats -who were watching from the window were very impressed. I've had dogs that were good ratters before, but this one really must be the biggest rat the kitties had ever seen. I had to haul i up into a tree and disembowel and skin it and I was very very glad Tom wasn't watching me. Still, it got done, and the dogs have 16 days of dog-roo. I'm not too keen on this catch and kill your own idea for them, as I think this is too exiting and they may go a wandering if they get the chance. And I'd hate it to be a sheep instead. They're not young dogs any more either. On the other hand, I really don't want roos in the garden.
Posted by Unknown at 5:46 PM No comments:

Well, Judith and Patrick are gone to Cradle mountain, and it may be a while before we see visitors again. I enjoyed having them very much, but I didn't do much writing. Anyway, had a look at an old cool-room today, that hopefully soon will be here. Also came home with an old Abalone wetsuit - 9 mm thick in its heyday. It was shrove tuesday, and i was roped in as a pancake maker at the CWA rooms. Hmm. Lot of pancakes!
Posted by Unknown at 8:06 PM No comments: 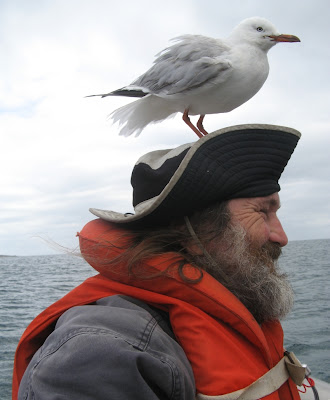 Life's little lessons: 1)If you aren't wearing a weight-belt, don't let go of your hand-spear at the end of your shot in deep water. (imagine Judith -who lets NOTHING stop her, bobbing frustratedly above her spear. Fortunately I could get down to it).
2)If you find an old 10 foot tinnie in the shed, put water inside it to see if it leaks before taking it into the big blue ocean. (The maiden voyage of the Queen Mary that Norman found on the farm was even shorter and less successful than that of the good ship Zoo. Her stern filled with water before the bow was IN the water.)
3)NEVER go into a cave that is too deep to reverse out of when your air stops coming down the hookah pipe (my mouthpiece detached while I was fighting with a crayfish, but I assumed the compressor had stopped running. Getting back in the water a second time after that was very difficult, but I did it.)
4)If you think you'll get to bed early in the Whoop-whoop, think again. (We had four separate sets of evening visitors last night, before I could cook our tea.)
Posted by Unknown at 7:06 AM No comments:

We blew up the zodiac... um. Make that... inflated. If you have ever suffered from flat feet I have a foot pump (and an electrical one, in case you have or want a flat battery). 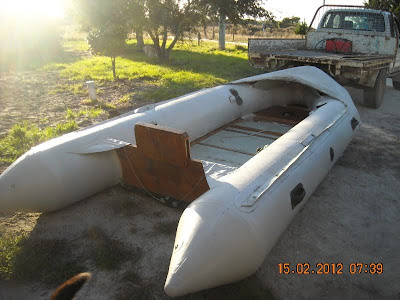 We did this at home, thinking it best to get problems ironed out (with a steam iron) before finding ourselves at the sea shore and failing to get the essential piece from the shed. The next step was to put it on Jamie's ute. Alas... eet weel not go iin! The boat is 4.5 metres long. The ute back about half that...

So the next day we repeated the process, having partly deflated the boat, and taken the floor-boards out. This time we got to Patriarch's estuary at high tide. Well... high tide according to Willy weather. Not according to water-level. Fortunately we now know the good ship Zoo has a VERY shallow draft - a couple of inches. Cap'n Dave had a lovely tow around the water! 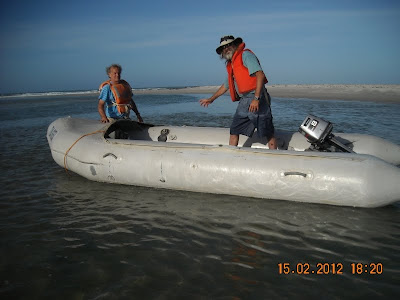 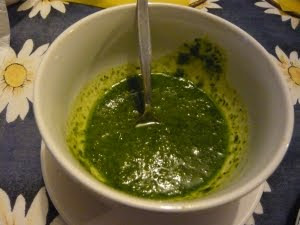 Life has been a bit like the infamous green sauce (good with everything, even dessert) - garlicy, interesting and not always simple. 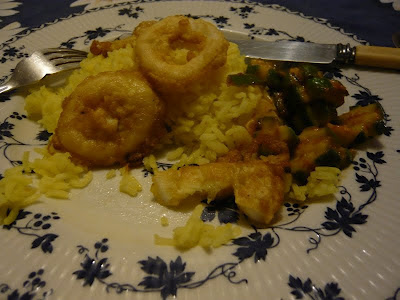 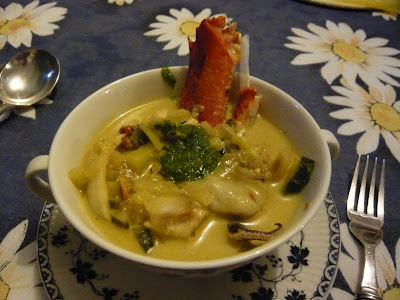 'Waiter, there is a tentacle in my soup' 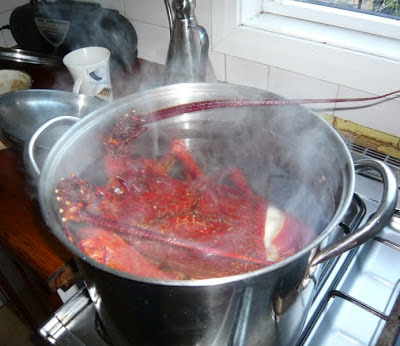 And cooking muttonbirds in the rain next to the newly restored fountain. 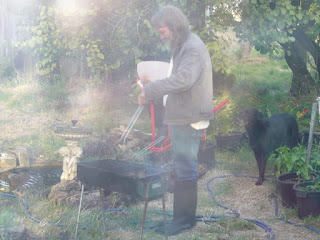 Posted by Unknown at 7:11 AM No comments:

Mel has taken pictures of her meals here for her food diary. She kindly offered to let me share them. They're made with local produce, as far as possible from scratch.
Crayfish cocktail 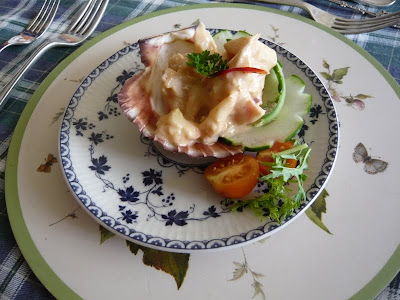 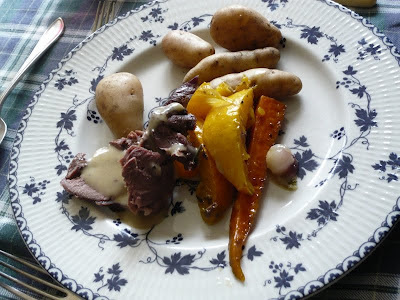 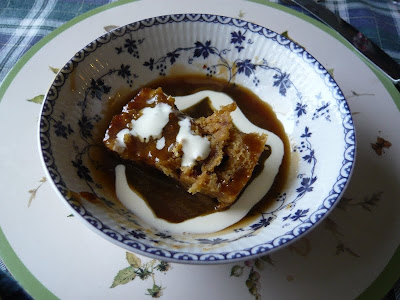 Yesterday we gave a hand at the clearing of the tip. It was once a house, rather a nice little one on a neighboring farm, but the bloke who was living there had reduced it to a place where even flies battered themselves to death trying to escape. It was upsetting not only for filth and stench and abysmal hygenic standards, but also for the wastage (which REALLY offends every ounce of my Calvinist soul). Obviously considerable money flowed into the house, and though tens of thousands were wasted on booze and drugs, it was also wasted in every direction - there must have been 10 good pen-knives under the piles of dropped dirty clothing (some rat-eaten and rotting) and discarded plates and half-eaten food. A fridge that had got too filthy even for this... lifeform wasn't cleaned out, or even thrown out. It was just closed and left running, and he got another. The stench was really unbelievable. There were dead rats, rotten potatoes (on the same shelf as new food had been put!) and used condoms on the floor (one has to wonder what kind of girl would get that close!). It was the sort of thing I imagined with heroin addicts in the grungy inner city, not out in our beautiful country.

It took spades, rakes and strong stomachs to clean it out. As commendation to giving your head to the local weed... NOT.
Posted by Unknown at 12:33 PM 2 comments:

I'm a bit pressed for time right now - we have a house full of guests, and Barbs is sick (yes, has been to the doctor, yes, has had bloods taken, yes all the short-term are negative, so it's either viral or possible Ross River Fever.) Anyway, I've taken them clamming, kayaking, fishing, diving, spear-fishing. Of course there is a lot food being prepared. They're lovely guests helping with that and washing up, but it's still stretching me a little thin. They're on Strzlecli now, so I have a little time to write.

Jude speared her first fish, Mel and Jude caught their first fish, and the excitement has been large. :-)
Posted by Unknown at 10:38 AM No comments:

Phew. In between French drains and rains, and making myself a rod rack (the workshop/shed was impossible to move in with rods, collecting the extra long shaft outboard for the zoo-diac, unrolling the same so we could read the builders plate (in French) for the MAST form, and then running the motor in a barrel of water, to discover its tell-tail blocked and the various tilt and lock bits not too well... exciting times. Anyway, it was a lovely day, and I did not go to the sea. Maybe I will get a reward in heaven, which would be good because I'm feeling rally guilty about how much writing I'm getting done. But we have some windows to clean and we're mostly ready for our French cousins and our friends from Melbourne - all at the same time naturally.
Posted by Unknown at 9:16 PM No comments:

Well, some hay moved (hay hay it's Wednesday) and the gate and pallets moved although I don't have them made into the new compost heap for the rest of the several tons of cut grass off what will be our lawn. Also one 3D dragon jigsaw done (repair to a bit of dragon-statue dropsy that did not end well) and a new pump ordered for the fountain, and a new mist-generator for the dragon (what do you mean you didn't know dragons needed mist? Where have you been all your life? Go to the the Drakensberg. Plenty mist there) and some cursing at lousy Aussie light fitting company that lets you order goods and pay for them... and then say oh they're waiting for their suppliers to deliver before they can dispatch. Gah. Friday will hopefully see the new septic tank. I may fill it with water and do a little swimming, just so i can say I have done that.

I've borrowed a little outboard for the Zoo-diac (whose name on the MAST form is 'Zoo') and have been trying to register the boat. And I am not going diving tomorrow, because I have to work. That deserves a halo.
Posted by Unknown at 9:12 PM No comments: