Ok with financial stalls temporarily holding up progress, I've been a bit lax about reporting in. That and having a surprise visit from my son James and my daughter-in-law, Alana, kind of put a temporary halt to major works. 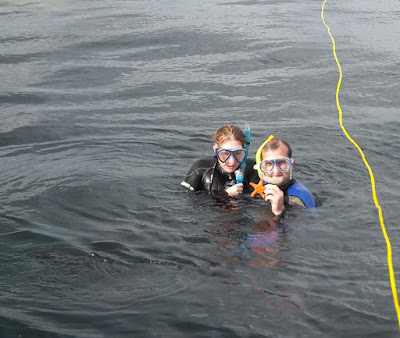 Which involved a fair amount of diving, fishing 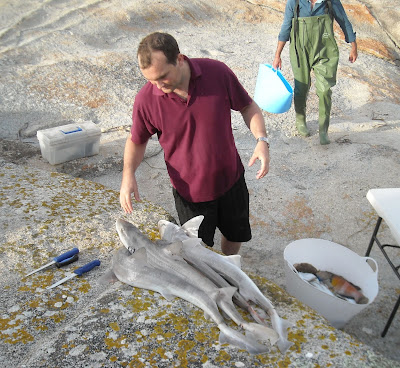 And my first 5kg cray. 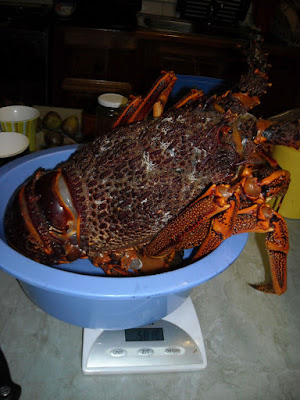 Normally diving crays here is pretty hard - not easy for the inexperienced, as they're few and far between, typically in deep, narrow caves or cracks at least 10 meters down, and very hard to reach and hard to pull out. Norman and I have got very into diving the way my bruv and I dived back in the old country - as a team. This has upped our joint catch a lot as so often you go into one side of a cray hole, only to have the spiny lobster leave out of a second hole. In among huge underwater boulders and chasms and cracks... that usually means you've lost them. So we work together - any large boulder if he swims left I'll scout right, and fetch the other if we spot a cray - if there is time. We keep a very close watch on the other diver, or at least their bubbles. This time Norm spotted a cray, went in to have a look... and quite unbenknownst to him frightened another into leaving quietly by the back door... only I was swimming past his back door and saw him coming. So I just settled, stopped breathing, with my hands apart on either side of the cave. He just kept looking backwards... until he was between my hands. I just had to scruff him and swim over to Norm, who has the catch bag.

Anyway - as I've been a bit stuck with the actual building, I've been working on making a hardwood stable door - from insulposts - a hardwood they used for fencing back in the day. Mostly these old fences are/have been replaced - but the wood is still undamaged after 40-60 years out in the weather. It's a heavy dense beautiful dark red/brown timber. Hell to work - an inch and a half thick - the door will weigh at least 100kg. It is made up of 49 posts - quite a job cleaning and gluing... and heavy. Man... I reckon in case of a nuclear attack - just take shelter behind my door. The house will blow away, but not that door. When it is done I will put up pictures.

Today I was up at Jamie's taking a piece out of the hydraulics of an old tractor - if we can fix it, we can borrow it... it's got a bucket on the front, and will make road building, as well as taking apart and moving the old house a lot easier. Besides I get to play digga-digga...