I'm back after a long hiatus, largely caused by work (a lot of it), a bit of depression (caused by the work. Writing is a bit like long distance running. For a lot of the time you just don't seem to get anywhere, especially with big books - which this last one was.) This, to be honest, was compounded by the usual issues with traditional publishing: They're very slow payers, and not generous ones at that. Their communication is terrible (for example they've found it too hard to tell me when a book is coming out. I look it up on Amazon.) With the fiasco with selling the movie rights to Pyramid Scheme (the publisher had retained the rights, and would have to pay us 50% if they were sold - in a nutshell, it seems it was too much like hard work for relatively little money for their Hollywood agent, so he didn't bother, and then when asked offered a very easily provable as such falsehood as an excuse. He claimed the company in question were just buying up a bulk lot of cheap properties. Well my agent had offered them a book to which I had rights... and they could have had for nothing, and they didn't want it, and none of my other very extensive author acquaintances had had such an approach, so: BS. It was a small but respectable company, with a good track record... but not based in Hollywood)left me so mad I wasn't wanting to do the ordinary writing work (for which I'd have to wrestle to get paid, with royalties that would be late, and the last twice, had obvious adding up errors in them. It's possible to work, and work well through this, -- I've had to do it before -- but it isn't easy. Some people like to talk about misery and spread it around. I'm rather more like a cat. I prefer to be on my own to deal with it. And not inflict it too much on others. 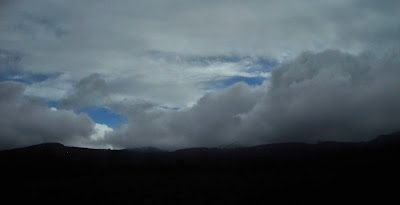 I did it. Still. I was fairly bleak about it.

I finally got it done, got it turned in. Got the two short stories I had to do done. But it did leave me under pressure, and not really with the energy to spare for the blog. It's why I have decided to press ahead and self-publish a few novels - I have brought out my reverted to me rights books - and they sell steadily and pay honestly and on time - without giving me the morbs.

Anyway, I turned it all in and went off to a small conference in New Zealand, where I was GoH.

New Zealand was interesting in a head-space sort of way. See, I had been to New Zealand and Australia (Tassie and Flinders Island) specifically with Barbs, back when I had finally decided that it really was time to try and move out of South Africa. We liked New Zealand, South Island a lot in the geographical sense. We liked Flinders Island more, and Tassie got third place for me. Still, I knew emigration wasn't easy, and beggars (which is what migrants always are to some extent - supplicants) can't be choosers. We applied to NZ and Australia. Now, in some ways NZ was the straightforward application - both Barbs and I have desired professional training, we scored high on points-for-entry system. We fitted into the age bracket (by enough). The downside is that I would have to work as a Fisheries biologist, or Barbs as a radiographer, and wherever we were put (be that a slum in Auckland, or Stewart Island). The fact that I was a writer, with contracted work ahead, and wanted to continue with that was a non-starter, unless Barbs worked as a radiographer (and we would have to live where they put her). Bureaucracy and rigidity seemed to rule their migration system. You're not allowed to be anything but the ordinary, even if you aren't. Now there is fair amount of that in Australian Bureaucracy too, although it is patchy. But their migration officials and policies did seem a lot brighter and more flexible. They accepted me as a writer - granted us permanent residence, so we came to the Island which was one of my best-ever decisions (yes, I know. Barbs made it :-)). So far I don't think their decision has cost them anything. It might even have been faintly tax positive ;-/. Barbs and I have paid our way. We're grateful to be here. We've tried to fit in, to learn to be part of our new society. To do our bit to pay back - and to pay forward - that acceptance. Before we left South Africa we had the entire nine yard gamut of "Australia! You'll be miserable. You'll be there seven years before anyone will invite you in to their home, you'll have no friends, and you'll be running back with your tails between your legs. You're a 'hensopper', a fool to go." All I can say is: maybe that'd be true for you jokers, but it wasn't for us. It's always hard to leave a country you loved, family, friends, and you do take a financial hit - but Flinders island and the people here made it a lot easier than I think most people have it. And my mates various have been a real failure to the seven years nonsense. I've made some of the most solid friends in my life here - far more of them than we did in Mooi River/ Nottingham Rd area.

So: New Zealand. It's a pretty country - got some good wine and fine company. Maybe there is a Flinders Island community there. 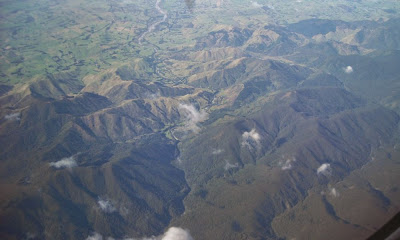 with lots of beautiful back country.

I enjoyed the con. I liked seeing a few old friends, and meeting the young writers there. There are some here in Australia (and probably in NZ too, but I didn't meet them) who are letting the Political Correctness and 'message' of writing overtake the important thing - the story. In the US that's become such a big deal a lot of cons are just painful, and I gather the UK is if anything worse (and the last Aussie one I went to had a little bit shouldering its way in). It was a relief not to find it in NZ. A good sermon needs to be entertaining, and I expect to hear it in church. When it's not entertaining and not in church... you're doing it wrong.

It was interesting to think that - had NZ not been so regimented about migration, and Australia less flexible, we might have ended up on a hill farm like this. 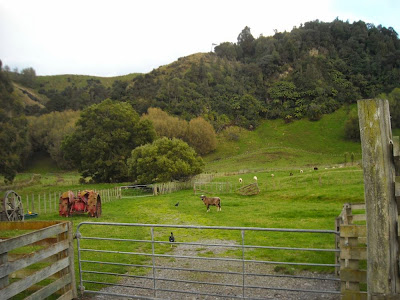 Which looked - geographically - very like where we came from. Although the mountains are different shape and there is more snow. 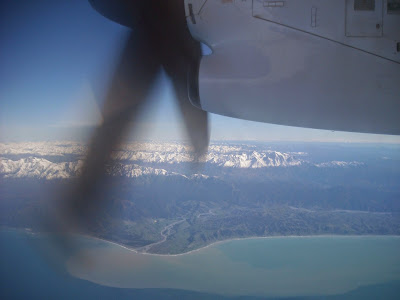 and the sea is an odd colour. 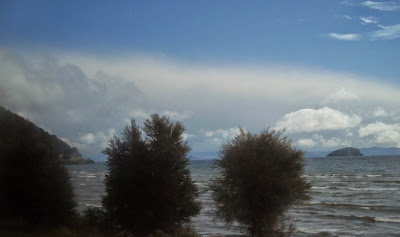 Er. That's lake Taupo. But the sea was an odd colour, especially where the glacial rivers had been running into it.
and it.

But it was soft and green (that bit is called The Desert, and is used as military training ground. It's bleak.)

I like the country, liked the people we met.But then came the best part. Getting on the plane back to Oz. Ok, It was a slightly bigger plane. 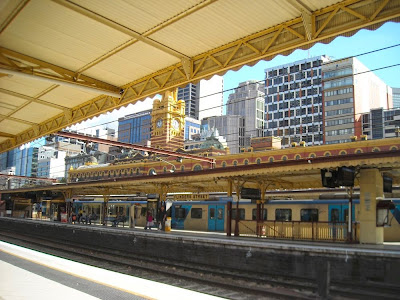 with buildings and people, people, people felt like coming home - we saw some good friends in Melbourne, and went to one of the best Italian restaurants I've been to in oh, ten years.

Back where I belong, where I know everyone in the airport building. And now we have final and for us best news part: we've just heard that our citizenship ceremony will be taking place on 18th of June 2014 at the MPC in Whitemark, and we will be Australians, not just permanent residents. I hope our friends here will all come to help us celebrate, because we do want celebrate!

Funny thing - Bureaucracy or no, we could move to NZ as Australians just like that, now. But there is no chance we're going. We've come home. You're stuck with with us.