The great Trousers Point expotition took seventeen camels and roughly a mile of rope to secure the loads. Perhaps I exaggurate about the camels... but not much - the Ute was full to the top of the canopy with kayaks and rods and dive gear and food and drink and bait and throw nets and extra clothes and somehow we left the kitchen sink behind. The part about the rope, however is true, at least if you had to untangle it all. We had to ferry everyone in two loads, and by the time that I got to the beach the slave Labour - aka - Chris and his kids had the fleet of trusty galleons in the water. 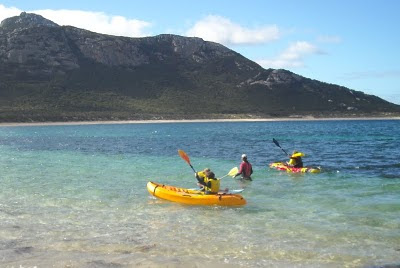 Much piracy ensued. I was supposed to at least walk the plank but escaped with a keelhauling and promise that they would catch fish. And then we went and harrassed the wrasse. 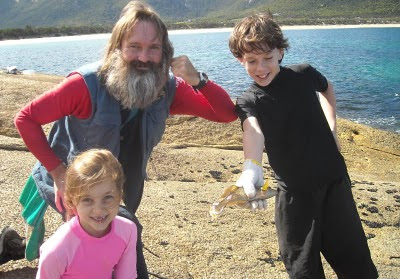 Chris and I hoping to write some fantasy together and here you can see him being inspired... or falling asleep. Maybe it was the shock of catching his first ever two fish... the second a whitebait in the thrownet. 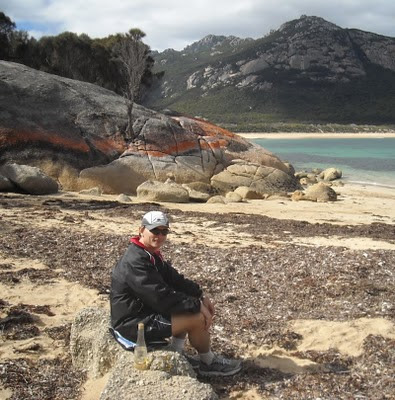 The birds were working the shoals of something, divebombing the water -- and it took me far too long to work out that it was probably Australian salmon chasing the little fish up into bait-balls, but by that I got out there in the kayak they had all gone home for their tea. So we did too.

Anyway we came home for the evening squid-spodition. After a near-miss from Declan, finally Aedan caught his calamari dinner, and they returned squiddy and tired and happy. It's a good place to be a kid... Or an adult who hasn't grown up that much.
Posted by Unknown at 4:52 PM