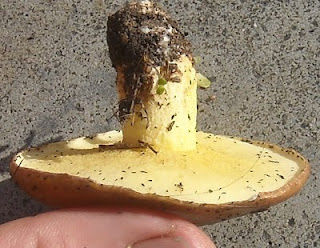 Hmm. Sounds like a dodgy boarding-school story. I think these mushrooms are slippery jacks Suillus luteus - they have pores not gills, they occur under pine trees. 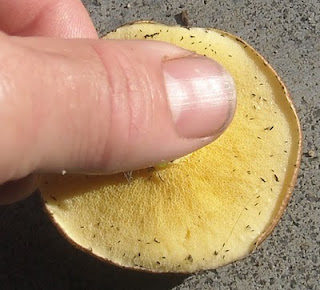 They do however not have velum (veil) on the stem so may be Suillus granulatus They look rather like Boletus edulis from the woods back in South Africa, but they're very small and more mushroom shaped. I'd love to be sure before eating them though. 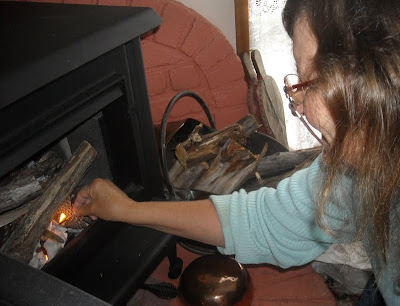 We got the heater going today, and the house smells a bit of hot iron and cooking paint. Windows open because of it - which is why we did it early. It's been one of those days sent to prove that weather forecasters in South Africa had no idea what 'scattered showers' actually meant. It means sousing rain, and three minutes later patches of blue sky and and twenty minutes later put the lights on because another shower is scattering for the next five minutes. Anyway along with howling wind and heavenly incontinence the heater (set on very low to 'cure' the paint - poor thing I should prescribe asprin and calling me in the morning) has worked a treat. It's nice that one can see the flames. 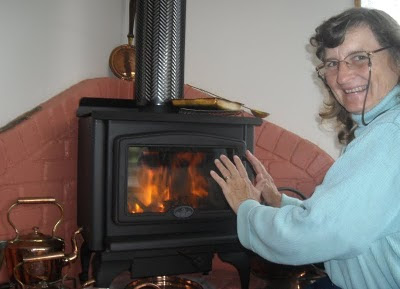 I was rather taken aback to discover the other day that actually no, not everyone barbeques the fish they catch. It's something that medium to high oil fish are particularly suited to. 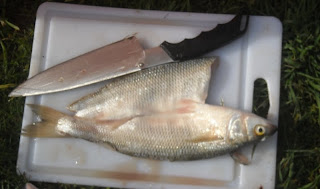 For whole medium size fish - I like to gut fish for the barbeque through the back (not the belly) leaving the belly-flap intact - 'vlekked'* (and the head on for cooking - you can take it off to serve, but it makes a 'bowl' of the belly section). If it's really decent fish - anything above 500 grams - it's quite a good idea to slide the knife both sides of the backbone and just take it out. That way both sides are the same thickness, which is a blessing for even cooking. I'm actually a believer in scales on for this excercise - just to insulate the fish a little. Thin fish I think should be cooked quite fast - ie near and fairly hot whereas thick fish tends to overcook outside if you do this. I believe firmly that all fish needs to be heavily pre-salted - about 3-5 minutes for an inch-thick piece (only fish like tuna that are intended for serving rare should be thicker). The salt firms it up a little, and allows penetration of the salt - which means the very outside of the fish is too darn salty (diffusion you know...) so then you wash the salt off giving it about a minute rinse - which gets the salt OUT of the surface - so some of the inner salt then diffuses out. Pat the fish dry and leave it if possible in fridge for 15 minutes or so - uncovered if possible. The salt makes pulling the rib and pin bones out a lot easier, if you want to do this. A pair of artery forceps is the answer to this!

Life really is much simpler if you have a barbeque clamp of some sort, and a fire that is big enough to have good coals one side and HOT the other. These pics were taken indoors on a griddle - which just doesn't cut it for flavour, but when it is raining outside... On the beach, on a driftwood fire this is just the full Robinson Crusoe without the "it tastes like S#it but you can eat it" factor. 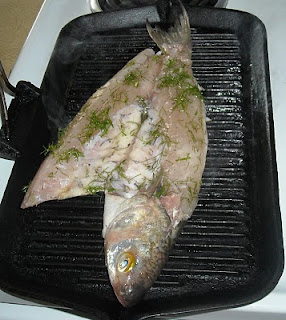 So: skin-side down over the good coals for the first bit - baste with a mix of olive oil, lemon juice, salt, black pepper, crushed garlic and chopped fennel leaves. Watch the fillet like a hawk. Overcooked fish is 'orrible - and so is rare. The belly section will go white (from translucent) first. You'll see the cooking proceed up the cut edge of the vlekked fish - when it gets just over 2/3 - flip it over over and onto the hot stuff - very close to the heat - you're looking at about a minute here. Check with a knife tip that the thickest flakes easily (if not - another half minute).

You can pull the head off easily at this point and either serve off the skin or slide the whole thing onto someone's plate. Usually the skin is worth leaving, even if it hasn't got scales on. 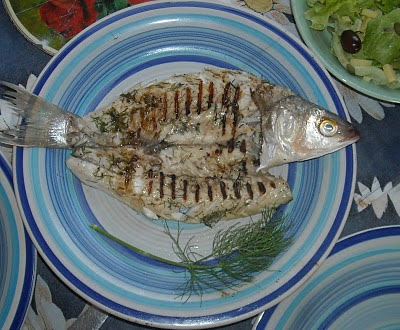