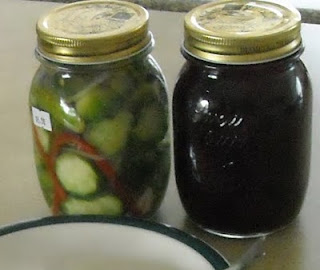 Inge caught me red-handed. It happens when you pickle small beetroot and get visitors :-) (not what you were expecting was it?). The cucumbers are starting to die and so we harvested what we could and made pickles out of them and small beetroot - starting to prep for the next invasion (my boys - who can eat enough to put locusts to shame. Last-night's power-failure fishing produced these - with B holding the light and me making sort of frantic grabs with the little line basket from my sea-fly casting kit as we don't have a soft fine mesh scoop net yet. This is a very shallow little thing and the garfish were seriously un-impressed with it. The average attempt -- and I think there were about 7 attempts -- went something like this "Keep the light on him B!"
"There he goes!"
"Got.... B#$@$!"
"Try from the side instead"
"Got him! Oh B%$#%%!" as the garfish acrobatically leaps over the top and piroettes away into the black corduroy of a rather bumpy ocean.

Anyway sheer persistance paid off and we got three - and some squid. The squid took some seeing as they blend themselves with the background. All you see are baleful green eyes. We also chased two flathead half way across the ocean. They're a lot less inclined to stay still and rely on camoflage.

We were alone out there last night (the sensible experienced blokes having gone to bed) and it eerie, scary and beautiful. The value of no common sense was about 4 feeds and the biggest flounder I have seen - too big for my pan, I reckon - I'll have to grill it on the barbeque. Shows why I have no common sense (and that's my story and I am sticking to it).

Barbs collected our chainsaw today and we were remined once again of the folly of buying off a catalogue - it was expensive for size compared to the Stihl and... a lot smaller than we thought. A lot smaller than our old one and probably too small for planking which was our possible use besides firewood. However it does cut very well, and is very light. We have about one and half ute-loads of firewood ready now -- Only another 3 and half to go... We also paid for the Ute service and new radiator thermostat... nearly died of shock. We're probably more used SA prices which I always found hard to swallow... This was not the time to notice the newly serviced and sorted and checked ute was leaking green fluid (and it is a blue slug, not a squashed cabbage caterpillar). I expect people to tighten hoses properly even when I am not paying through the nose. Methinks we might try the Lady Barron alternative, before horror of horrors I face working on it myself. I've done so before but really I have better things to do with my time. I'm not one of these blokes that goes all gooey at the sight of oil. I'd rather fish, write, cook...
Posted by Unknown at 4:44 PM