Hmm. I should have stayed in bed.

It was the sort of day that common sense says that oought to return to bed ASAP. And then the bed would collapse, catch fire and the roof cave in... Not that it wasn't a beautiful day. It was - with our first frost this morning, clear and perfect for going to sea (and thank heavens I didn't. The SES would be out))... only I had some work to do, had to stop rotating the cat with writing, get the cover for THE FORLORN finished, get the last two strips on the roof of the little shed, get the capping on, cut another load of firewood, and dry some more apples, as well as the normal daily tasks of feeding Barbs feeding the chooks, feeding the new piglet (Fairy. She lives in the bottom of the garden and sh... sits on toadstools. Dances going umph.) 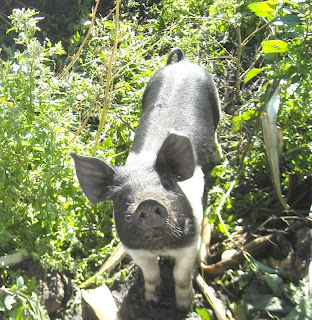 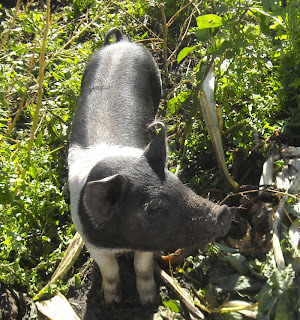 etc etc. So - I went up and collected some grain for fairy, offloaded the wood I had in the ute alreadey from yesterday, and that was the last thing that went well. I needed one long narrow strips of corrugated iron to finish the roof. Only had one broad short one - but cut in half, it would add up to two of the right length. I found tinsnips and found it was impractical. So I went to grab angle-grinder, and discs I got from Peter. Couldn't find them. Tried again with tinsnips, swearing at my put-down syndrome. Went looking again. Found a disc bought for another purpose... Looked for the special spanner thingy. Searche high and low. Finally found it in the last place any sane person would look, ie. the the right place, the box I took the grinder out of. What kind of idiot puts it there!

So I start cutting. good thing I was wearing safety glasses because the blade lost it's metal hole piece half way. Bits all over. At this point I tear the corrugate sheet in half. It's not too straight but it's meant to tuck under. The bits are hoiked up onto the roof, and I climb up - and it's tricky because the ladder is kinda short, and the roof steep, and there is only a tiny gap left open in which there are beams to hold onto. I'm a fairly competent rock climber, and if I find it tricky, it's... awkward. I have a rope and a waist strap, because you actually can't stay on the roof. But now we're up there with the drill, power, roofscrews. What can possibly go wrong... job will be done in 10 minutes.

I break the drill bit within seconds. Climb down. More tricky now, with rooftile in the way. Return with last hex-headed drill bit - power drill only take hex-heads.Put it in drill, reach for the spot, and the bit falls out, slides down roof and lands in the long grass. I climb down swearing. hunt for drill-bit and cannot find it. Go get cordless, change battery, as it will take ordinary bits and I have lots. It's a cheap old cordless, and not too strong and the battery is worse. still we drill the hole - and realise it actually needs to go through the 4th sheet. Insert said 4th sheet too, removing place I had to stand. Realize that hammer, screws, and power drill are now unreachable inside the roof. Take off the tile, perch screw box and hammer on the open ridge. Wedge the in good-o so they don't fall off. They fall through instead. And off comes the roof tile and in I get again, and fish them out. Do not wedge them so tight. Drill hole... as I am starting to drill box of screws slithers off the roof and crashes onto walling tin below. Climb down, and put enough screws plus a few spares in my pocket, and sharp pointed screwdriver (to make a dimple so drill does not skitter), climb up awkward angle and scredriver falls out onto the ground below...Drill bloody hole anyway. Screw on tile. Start drilling the next hole... battery is dying... Take a screw and hammer hole through (you can do this without a lead hole, it's just much easier with one). Lower cordless down to get other battery (charging). The slip knot slips... and the drill falls the last 6 inches, with the battery falling off.

Climb down, bloody awkward now. The drill is fine, battery is fine, but... the bit is broken.

And the other battery is only half charged. Bugger it I'll make do with a hammer - only 3 more to go... and the cap - 4 at least. And I have 8 screws in my pocket. I put the cap where I can reach it, climb up, put in the other screws and put on the cap. 1 screw in fine. Best check the other end... oi. it's a little shorter than ideal, but stuff it.... (I am hot, tired, cross) hammer screw. Hit my thumb, the same one the lobster tenderised. And so I try to drill it in -and the bloody screw falls out and slithers off the roof.

And get off the roof while I am still alive and sane.

I stuck to trying to work on the cover for THE FORLORN (which was as fraught, as slow but less damaging)

And I decided that anything involving chainsaws should best wait for another day. Even Scottish dancing could be life-threatening.
Posted by Unknown at 9:28 PM