There and back again.

Well, no magic rings or treasure. Some Orcs. No Dragons. The trip took we worked out 42 hours door-to-door, and somewhat more back.

We flew from here to Lonnie (Launceston)and then on to Melbourne on New Year's Day, and then on Singapore with a seriously hungover crew, and food that seemed to believe chile peppers were life's little essentials. I am not afraid of low level chiles like this, but did wonder if this was the catering staff's revenge on the blokes who don't have to work. We had to get out at Singapore while they cleaned the plane. It looked very like an airport in the dark. So much for foreign travel. Then we flew on to Dubai (or, if you're like us, fairly broke, Don'tbuy)where if you had the courage to push your way through the throng (at 4 AM in the morning it was packed) you could buy all sorts of stuff that wasn't fish-finders, or dive gear. I am sure for rich urbanites into luxury shopping it was paradise. I do carry a Gucci handbag for my fishing trips and little stiletto Manolo Blahniks to dive in and always douse myself in Glivency scent to make myself more appetizing to sharks, so I should have loved it. Instead I was really claustrophobic, and glad to fly out on an elderly plane (with a buggered seat for your truly) for Lusaka. 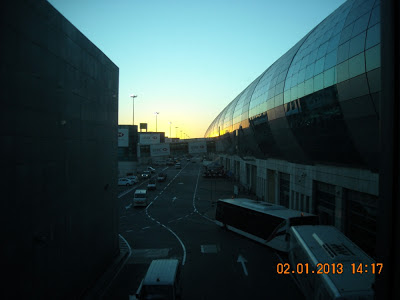 At Lusaka they sprayed the plane with bug spray, which made my eyes water, but otherwise left us sitting there. And then there was Harare airport on Wednesday evening... On the plus side Harare Airport has rather few working lights, because there is a vast picture of Bob Mugabe peering benevolently at you. Apparently it can go better and be sans power entirely. There is also viewing deck which lets people watch new arrivals getting through customs and collecting their luggage. There is not a lot on TV, so this is good family entertainment. Our younger kid and his wife were there waving. We did see them, eventually, and very happy we were to see them. As a point of reference you need a precise address to fill in a form to enter the country. Do not try to come without it. We had the address, and had a smooth passage into the country as a result, albeit totally exhausted.

But it wasn't over. Outside the airport the first thunderstorm of summer broke to welcome us. The roads in Harare have not seen any real maintenance in what looks like 30 years but may only be 10. The average driving speed is about 35km as it's leaping with fairy-like elegance from one piece of tar to the next, or at least picking your potholes (only a blind drunk driver drives straight in Harare). Only now the potholes were full of water, and their depth impossible to judge. Traffic - baring manic 'taxis' - minibuses that make South African ones look like the model of decorum, slowed to a crawl. It's a city of 5 million + people and has, despite the situation, a lot of traffic... and no working streetlights, just rusty poles. The final leg, which should have taken 20 minutes took near on an hour and half.

Harare, well, Zimbabwe, proves that down is a long way. Life has a semblance of normality despite the problems. If you're very rich (and oddly that is quite true of a lot of people)it's very close to normal. It wasn't as much of a shock to us as it would be to other islanders, but 6 foot walls, with electric fencing on that, and houses done up like Leavenworth with bars and motion detectors an alarm systems were something we'd forgotten. The gardens are manicured - manual labour is cheap. The people are friendly and welcoming, but I prefer life without bars. I look like I belong in a zoo anyway.

We stayed with my son's Mother-in-law, and they were frantically busy preparing for the re-affirmation ceremony, which was the whole 9 yards with a slew of maids of honor and groomsmen down to the ringbearer. Oh more like the hobbit... he wasn't fond of wearing shoes either. Neither was I. The temperature was high, the humidity higher, and the rain very frequent. We basically had about 2 sunny mornings and maybe 3 afternoons in which it only rained part of the time. It's hot enough that being wet is no hardship and it did make the place very green. Zimbabwe is very verdant and beautiful at this time of year - where the trees have not been cut out for firewood. This is a private garden venue hired for weddings. 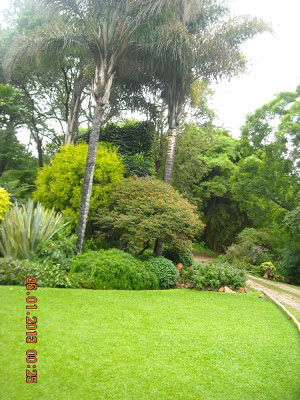 Public parks and wetlands and even sidewalks are planted with maize. There seem - weird for me for Africa - no cows, goats, or even chickens. The grass is long. There are satellite dishes on the huts.

I think the livestock got eaten when hyperinflation nearly killed the country. They got to trillions for a loaf of bread, but after this there was no more sign printing... 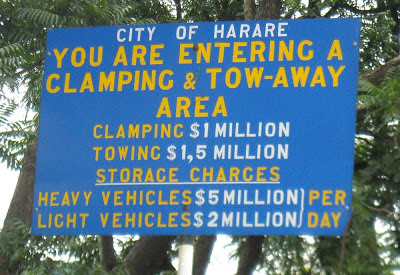 Everything is in US dollars now and the notes are used to filthy rag at times. There is no change smaller than a dollar. Everything is very expensive, more than Australia. Most of the it is imported into what used to be the breadbasket of Africa. There is still a lot of money... from mining and expatriates sending cash home (Zim education was once very good. They used UK exams. Their nurses and pharmacists staff hospitals all over the world.)

The city shows how people adapt. Power is erratic, with load-shedding outages for 8 hours or even days for whole areas. Those who can afford them have generators. Water, if it runs at all is only on even more occasionally, and has to be boiled. So people get by on private boreholes and buying water from tankers. The sewage system... well, yes. How long the boreholes can remain viable is another question. And yet, you can go shopping, and if you have the money, buy anything. You can go out to dinner. Booze is very cheap.

We did briefly make it out of town to two separate small-holdings, both of which have had their threats of eviction and forced seizure, with horrible stories that make you wonder how they can remain sane, nice kind people. One them produces more food than 90% of the land that has been stolen, put together. The other defends itself by being stony and not farmable, and with a very unobtrusive house. Next door the stolen farm lies empty, looted, then rented to some tenant farmers, who have been evicted for failing to pay the rent the thief wanted, growing weeds, which at least limit the erosion. A palpable sadness hangs over the country - which is still very lovely in prospect. 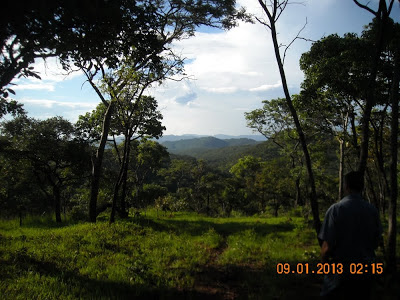 Like Peter Sarstead sang of Beirut - 'crumbling stone by stone'. It could be a good place again, but first it will have to come to accept the theft and racism - which isn't a one way street. And the damage to the infrastructure and environment is horrific.

A strip road through what used to be forest. 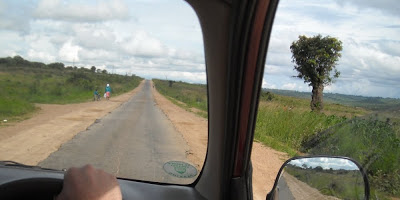 Still, we got to see some old friends and Barbs relations, some of whom are still battling along there. And if you don't look too closely they have a good life. 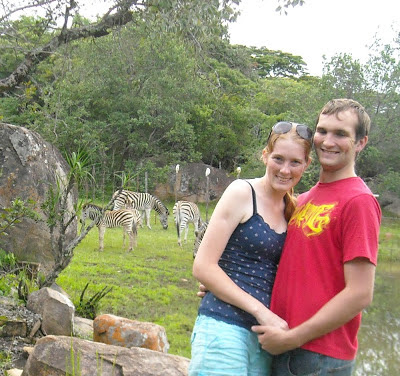 This is on the stony place where the cousin has a few pet zebra, and wild flame lilies. 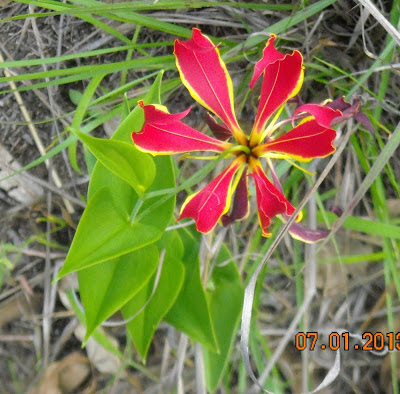 Which were also Alana's bouquet flower, and though weddings are less important than being married to me, she did look very beautiful, and her family did their best to make us welcome.

And then, it was over and to my relief, we got past the evil eye of Bob Sauron at the airport, and onto the plane, and flew all the way back with less chillies, and then got to Melbourne, where dear Jetstar's staff thought telling us AFTER we'd checked in, that they were running FAR too late for us to meet the connecting the flight over to the island. So that stretched our return from Monday evening to Thursday morning. If only I'd had this cold then, I would have sneezed on the bastards, who though upset customers very funny. They're cheap - but that is literally the only good thing you can say about Jetstar. They would not lift a finger to help, not even to point us to a pay-phone (mobile was flat). Unlike Sharp - our Island airline who are expensive, but cheerfully shuffled us onto the next flight, without charge.

And so I am back here in the shire. I have a cold. Thag you very buch.