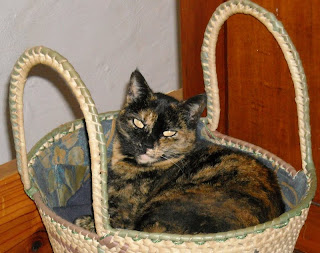 I took a bottle of dishwashing liquid for a drive to the dairy this morning. I'm not usually quite this insane. It's the sort of thing that usually only happens at the end of the book, which sadly I'm not at right now. It was supposed to be a milk bucket... Still, in my defense I didn't get a lot of sleep last night. Duchess, the tortoiseshell cat, was AWOL. Now, she is quite prone to being 'the cat who walks by herself, and all places are alike to her' (except of course when she wants meee-owlk, or a warm human to sleep on.) But I guess I'm being a little oversensitive about them at the moment. She wasn't there at supper, a no-show at bedtime (so we did a search of the usual in-house haunts), and then switched the light on every time a cat came in. And between four of them, well three, they do a lot of coming and going and pouncing on dangerous items like the food bowl. Normally, I keep the torch at the bedside, but it seems that it went for a hike with my sons and is now ornamenting Grahamstown from where I will not expect it to return. A student life is very dangerous for torches. At 11 I decided that there was no point in failing to sleep and went and searched her usual haunts in the garden, in the dark. Fun. Duchess is not known for coming when she's called unless she happens to want to. And tortoiseshell cats aren't just gray in the dark. They're invisible. Anyway, nursing my bruises, I crawled back into bed, to wake up every time a cat or dog stirred. I gave up eventually at four and went to find the siren coffee... And La Duchesse fast asleep on the dining room table en route. Oh well, that's cats. She gave me an appreciative yawn, tolerated a cuddle, and enjoyed some meee-owlk. So maybe my brain is a little more out to lunch than usual. I got to thinking about possible accommodation on the island while we built our new home. Possibly not the wisest time to evolve these sort of ideas, but that's how it works. Tenuous train of logic -- if getting there is so expensive, and transporting a caravan is right out cost wise, maybe a boat would do. So the wee hours of this morning saw me looking for secondhand boats. A little later, when ordinary people without missing cats were awake I called my brother.
"So, Carl, um, I just had another crazy thought, if I can't get a caravan to stay in while we build, what about a boat? A yacht, they're cheaper than motorboats."
Long silence. "They're boat shaped holes in the water you pour money into. And you'd have to get a skipper's ticket just to get there."
"Well, there is one for sale on the island. I could get my skipper's ticket later. "
"That's a possibility I suppose. Still, you'd have to look at the cost of mooring. How big is this boat?"
"27 feet."
"That's bloody tiny, Dave. It probably could go on a trailer."
"Er, yes. The ad did say there was a trailer. Is that bad? I really don't know anything about yachts."
Long silence. "If it was 40 foot, and you loved sailing, and it was really cheap it might make sense. But you don't and it doesn't."
"But the boys do. And I thought seeing as it was on a trailer, I could just tow it to the property. It could be a caravan now, and a boat later. No mooring fees and I wouldn’t get seasick"
It all made perfect sense to me at the time. Nearly as much sense as the idea of attaching the 5 hp outboard to a container, taking 20 L of fuel and sailing to Tassie did. Admittedly, that theory was evolved at the end of a roast leg of pork with laced with dried mango, and possibly a few glasses too many.
Oh by the way, the dishwashing liquid said it enjoyed the trip.
Posted by Unknown at 5:37 PM