When times are bleak... cook supper. Nothing seems quite so dire outside of that meal you didn't feel like but discovered you were starving when you got to. One of the forager/ self sufficiency fellow's greatest friends is humble bivalve - mussels, oysters, clams (pipis!;-)) and razor-clams. Unlike fish or squid, or crabs or spiny lobster or prawn, they're not not feeding or moved away - especially the first two as they grow on hard substrates. If you can manage a tide-table you can probably collect them, unless the sea is really really really thumping. They're a lot more versatile than people realise - Like corgettes (zucchini , baby marrow AKA the reason why you lock your car when you visit me in summer (so they don't get put in your vehicle quietly)) you can get quite inventive about the ways to turn them into dinner. Oysters are great in steak and kidney pudding (they were traditionally part of this, when oysters and kate-and-sidney were poor people's food) and mussels can be used as part of everything from rissoles to stir-fry. I always freeze some for hard times - steam them open, de-beard them, and then return the meats to the cooking liquid plus some extra water - it needs to be slighty salty. I put the bowl with a small plate on top to keep the mussels down into the freezer, and take it out and bag it later. Like this they'll keep for months.

So this was tonight's supper - about 50 mussels, 4 rashers of bacon (normally this would be our own bacon, but life is too screwed up for that this winter) a bunch of tiny asparagus from the garden (Asparagus are a great crop for self-supporting too -- take lots of initial work and nothing much after that) some flat-leaf parsley, a red onion, and - for things not out of the garden/ made by us, olive oil, flour, and a bit of sherry and white wine and some milk from my neighbour. And rice. A roux made with the flour and the fat from the bacon and then made into delicate wine/sherry flavoured sauce with those and the milk - add mussels to exchange flavors, add bacon, pour onto the rice (laced with onion sliced v.thin cooked very slowly in a drop of olive oil in a closed cast iron pot (as cool as the the stove will go) until soft and translucent and then flashed at heat to caramelise the natural sugars). The asparagus I added to the top of the steaming rice, for about 4 minutes. The flat-leaf parsley adds some colour and flavour, and must be put on at the last to retain colour and release scent as it cooks slightly on the hot food. 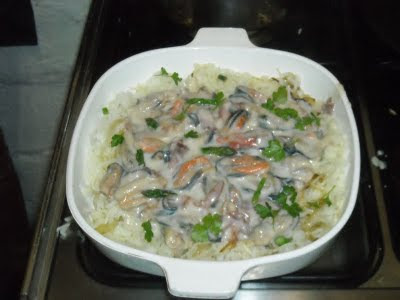