Well, the settling process has inevitably been a little hard. The Animals I will say are all universally pleased to be here, and delighted to be with us. And I think understandably a little insecure, although despite all the horror stories they seem to be OKay so far (and I was told by several people that cats just don't do quarantine - ours seems to remember us and quite frankly be less traumatised than the dogs. They all do need a lot of attention, but are straight back into their old ways... well, all needing a scratch or notice on average every thirty seconds, which I hope will slack off soon. Last night was restless in the extreme with Roly just not settling. I've had about 2 hours sleep which hasn't helped the book finish. And we've had sets of dog-and-cat visitors all day. We went to the winter Solstice Scottish dancing/ singing do last night (not the night I would have chosen. Can't these celestial bodies show ANY consideration?), which was... energetic (just to watch!) Fun too. James stayed in and fire/cat/dog sat, and shortly after we got in, we discovered Robin-cat was missing. Frantic inside and out search ensued.
HUH. Madamoiselle had decided to sleep INSIDE the cupboard and now that she was comfortable, was not coming when called (that seems to be the main difference - which won't last - the cats now come when called. The right cat to right name. Bizarre!). 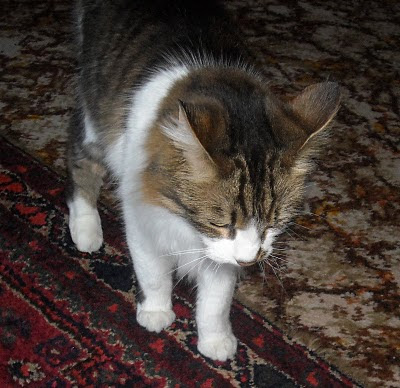 Little Robin-cat was admittedly so appreciative of liberty and people and above all CARPET she was actually doing the tail quiver. Bat (once he'd punished us - about 2 hours) was doing the leg-weave, and climbing up your legs. La Duchesse was rising up and head butting. All she wants to do is sleep ON people, Barbs being first prize. Poor B had all 3 on top of her this evening. I am of course a bad man, because I won't have them on the table while I am cooking.

Dogs... well Pugsley says it is really time he was boss dog and he hasn't had to share space with anyone for a while. Wednesday is being smarmy goody-two-shoes (as if I could be fooled). And Roly, is well, Roly. Happiest when sitting on you. 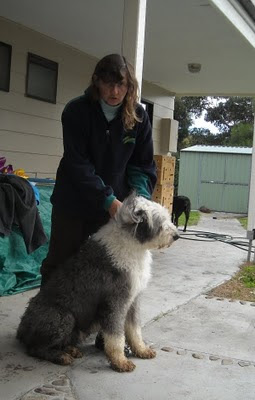 Poor baby, he is very thin. But they're all so obviously happy to be home, to be loved

Oh and they are determined NOT to be left behind ever again. Paddy was trying to lift James's bicycle out of the truck - and 3 dogs and bicycle was probably even funnier than 3 men and boat.
Posted by Unknown at 7:10 PM