We did it together! 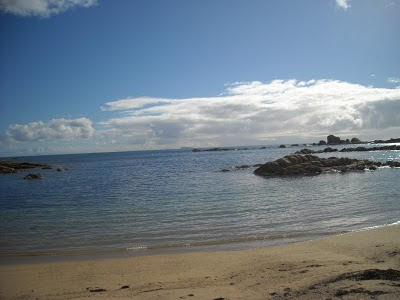 Today was really bright and sunshiny early on, so we got all packed up and drove 40kms north to a beach called 'The Docks' that has rock climbing.

First Dave and James went off snorkeling while Paddy and I fished. We caught 5 Wrasse that were big enough to keep, and must have put back about 20 that were too small. I swear we were catching the same fish again and again. Dave and James came back with 2 abalone and we had a lunch break, which I was needing by then.

Then Dave had a quick fish, just to prove he could catch a bigger Wrasse than we could, and then he and Paddy had a climb, using 'trad' gear. Dave led, and we heard their triumphant yells as they topped out echoing across the bay. 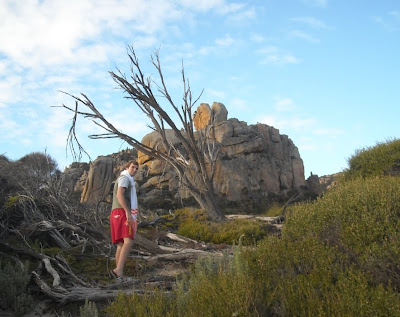 They both returned to the car safely where James and I, having caught a fish each, were resting.

It was a day of sun, cloud and then more sun, with a spectacular sunset to finish it off. But it was fantastic to be out and about with the boys again, and I certainly enjoyed the day. We sang all the way home, so the wallaby were scared off the road, and we got back without hitting any. (Touch wood, we haven't hit one yet!)