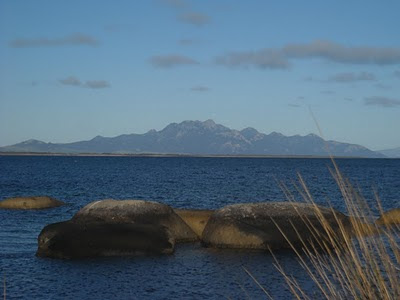 We had our first frost this morning, but the day was clear and so, by lunch time, it was shirtsleeve warm in wind-shelter patch behind the house. Which led James to "Well, you finished the book, and it's nice weather..."
B and I were agreeable - nice weather here in mid-winter should be seized and used. Paddy is frantically trying to finish something before Clare gets in - and as rain is forecast and we don't want Roland wet later than 9.30 AM (he is not one of your fast drying dogs) so Paddy dog-sat and we went beachward - which as this James's idea I ought to have guessed involved diving (he's obsessed with the hand-spear which for the record is like going after antelope with an assegai. 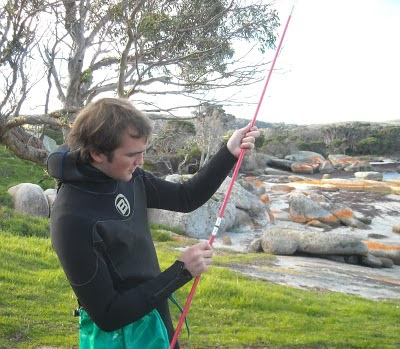 Possible but not very probable. But it is a harmless ambition... well except it means I have to get in the water too. 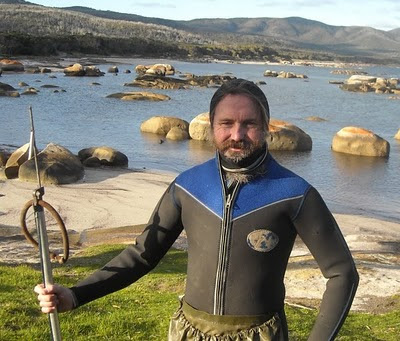 And get my beard in the zipper.

B- very sensibly went to go fishing instead. We'd decided on Sawyer's Bay - an area we've never explored. (There are about 200 kilometers of coastline. Add another 50 for convolutions, islands etc. There are bits, just little ones, I have not seen yet...;-)

The first thing we learned - after the experience of mind-numbing (and toe and finger numbing) temperature of the water - was that we'd made a small error of judgement - like 300 metres, which on a global scale is tiny thing... when you have to swim it through very shallow water in the cold, seeing nary a fish nor abalone nor crayfish - it's a long swim. Eventually I did see a fish. A big flathead. Unfortunately it didn't stay to be speared. We found a Nautilus shell, and then a handful of possibly bream... or something else. Anyway a change from the usual flathead-flathead-flathead or wrasse. And to hades with James and the handspear - I wanted them. So I pulled the rubber on the elderly spear gun (which has never been one of my big success stories, but compared to the hand-spear...

The elderly rubber promptly broke. I wacked myself in the chest, but that was that. And by the time James and the hand-spear got there - there was nary a fish to be seen. Ah well. We swam on to B, who had caught nothing. And so, as there were lots of those nothing available back where we'd come from, I tried to talk to her only my mouth was numb... and then six or seven yards past James (about 15 yards out, standing up, waist deep)

A dolphin (sorry no camera in the water)

B shouts points and waves - and James decides it's a grey nasty she's telling him about and bolts towards us -not looking back. By the time we managed 'Dolphin'it slipped away again. We stood on the rocks and watched two of them, possibly the reason we'd seen so few fish. Anyway, as they say back in South Africa, 'lelik is niks, maar stupid' so we got in and swam after them. Didn't of course get anywhere near them. Got to the next rocky point, which was slightly deeper and rougher, and had the inevitable wrasse, and a few abelone (Poor B had caught nothing, and had slipped and fallen hard) and some stripy fish that nearly gave me a heart attack - or at least James vanishing after them around a rock did(which I thought was pomonitory, but was actually an island with a narrow channel to landward - with a high wall - in which he chased fish).
We always keep tabs on the other diver... and I lost him. I hauled out onto the rock to look and couldn't see him behind me or to seaward(he must have been just in the lee of the rock I was standing on) and yelled (yes, even underwater it works - and we're not diving with tanks - free diving with snorkles - come up to breathe.) I yell frantically and B starts running from 100 yards off, waving her arms about. I'm trying to work out WHAT she's waving about - whether I need to dive in, and just where she's pointing - when James appears to LANDWARD behind me - out of his channel. So all was well. James found a couple of abalone, and we walked back. The boy had already passed the stop shivering point, young idiot. Anyway, all was well except B is sore from slipping and the deep freezer didn't benefit a lot. Oh and I saw a wombat, walking back. We were walking back, not the wombat, he was standing shaking his head at us, saying 'morons'.
Posted by Unknown at 8:21 PM