Is the ice still in the river?

This seems appropriate as I have just been writing about the frozen Dnieper River in the Ukraine (of course it's the territory controlled by the Grand Duchy of Lithuania in the book, not Ukraine).

Despite gale warnings and rain forecast James and I took the galleon in persuit of adventure to Pat's river for an hour or so in what was theoretically the hottest part of the day. 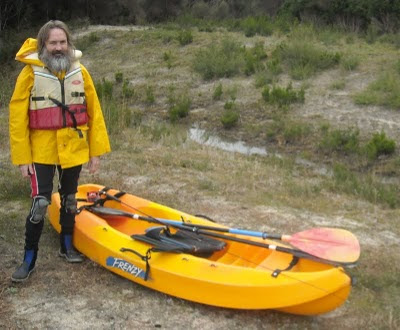 The joy of being very close to all of this sort of thing, and quite organised is that from get up from my desk to get into the water or throwing a line takes 15-20 minutes. Unlike my good friend Chris back in SA who would get up at two AM, to faff about, and fiddle pack everything and check it... and be lucky to be launching by seven (and he lived a few hundred metres from the slip) we're a good team, and quite practiced at chaos theory packing. Hey, it does mean some interesting things get left behind, which has been responsible for quite a lot of fiendish contrivance and ingenuity over the years, but most of it has residence in the dive box or squid box or flounder crate etc.

The ditch next to Galleon would have been a better target... warmer for a start. We took the big kayak which has a 180Kg capacity - and James I don't weigh much more than 130Kg. We got the boat down to the river - low tide and it was the color of tea. Black, stand-your-spoon-in-it-tea with a reddish tinge, overhung with ti-trees and she-oaks. It's quite a pretty estuary, and the vessel was perfectly designed for those with piles - with lovely soothing icy water coming up through the drainage in floor, and soaking my sit-upon. It's a sit-on Kayak designed not sink even if a wave breaks right over the top of it, with drainage holes. Someone needs to explain to the water that it needs to go OUT not come seeping in, and through the rubber of my wetsuit. We paddled upriver first (for the Google Earth-curious - it's the little river next to the airport. We got in off Boyes road, next to a bunch of guinea fowl - I'm not sure if they show up on google earth, but I was very excited to see them. Good eating!) There is a mile of estuary that is tidal. It's about 40-50 feet wide at the best down to about 20 at the upper bridge - where there is a little weir with a dead wallaby in it. And a huge fish that dived away from us... so there are fish in there. We'll investigate at higher tide, sometime.

On the way back down, we established that the fish living in it are entirely mad, as our tandem paddling or vast skill tipped us into the drink (it's not very stable with two on it) and that water is around 8 degrees Celcius - a LOT colder than the sea at 12-14. Anyway, we paddled down to sea, and met the gale (delightful when you are wet) and passed a dead ray in the 6 foot wide range. Sorry - no pic - just as well as the camera would have got wet. Hmm. Dead critter at the top, dead critter at the bottom... maybe that system needs a good heavy flood before we forage there.
Posted by Unknown at 4:28 PM