Yesterday constituted nothing more wildly exciting than my pouring some sugar down the inside of my trousers. No, I won't explain. I will leave it to your sordid imaginations :-) I wrote, James went for a dive at West End, and brought home some Abs. We played about an hour and a half of Cranium and I proved 1)I can't hum, 2)I can't spell without writing it down. 3)Bill has unsuspected gifts as a sculptor. 4)Women are smarter (or play cranium better) than men.

Today the weather was supposed to be utterly calm, and we were supposed to set a long-line for gummy shark to show our frequent dive partner how it is done. I have set many as a biologist for sampling purposes, and really prefer leaving shark alone. They're a very popular eating around here - I find it rather boring fish - but I did eat a lot of it (impoverished biologist's first rule: work on something that you can eat. And preferably that someone else catches or keeps alive!) I 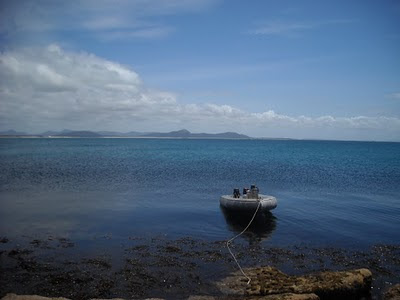 This picture is a falsehood and a deception. The wind was stiff, the swell nasty and short, and the flat sea was full of holes. We kept falling into them or going airbourne over them. Barbs had a sore back anyway, and was looking like death warmed over by the time we got out there. I wanted to set in deepish water (daytime set, just off the tide-race (fish come past). Only the bouy-lines proved a little short. The small bouy sank.... the big one floated and so did its anchor... (just as well so we could recover it) so we had to set in much shallower. The catsharks (all returned) got among it, and we did get something large - but it bit off the snood line as we were trying to haul it up. And it was wet and choppy, and B slept on the boat and then on a rock. We caught a handful of Flathead -15 between us -big fish, but rather sparse - picked up B and the wind dropped and let us retrieve the second set - which is when I took the photo. Hard to believe we got pounded, looking at that. Nice ride back though. 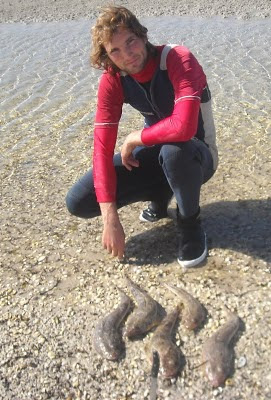