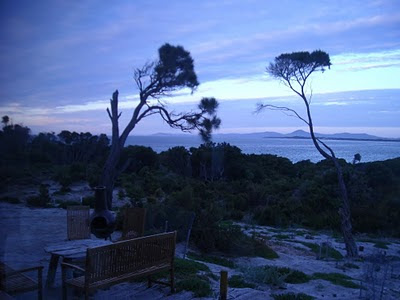 It's been a session of farewells. Saddest and hardest for us has been James, seeing as we did not see Paddy at all this December. It's a reality, as they grow older we'll see less and less of them, especially if they end up in far countries. It was a major, major, major epic getting them permanent residence, and a door I desperately wanted to open for them, but what they decide to do with it is their own decision. That doesn't make it easy for parents I guess, but that is reality and we'll have to accept and cope with whatever happens. There will always be a place here for them.

Barbs James and I went to D&L's music barbeque, and were insufferably rude by being distracted into diving - and spending a lot of hours out in the bay. It was a 2km swim - for which I am now paying. I have chafed two toes raw on the fin. I did succeed in spearing a huge flathed - which got away, and zebra which didn't. James got a leatherjacket and a small flathead. We saw some really large bream, and trevally. All-in-all a very good father-son session, and I hope our hosts forgive us.

Our Melbourne (for now) dwelling friends are away, and we have the loan of their vehicle while ours gets some fixing done - expensive, slow fixing. It's a minibus - as an ex South African I find driving it (back from the airport yesterday) makes me feel I should be playing Boom boom noise instead of dulcet classic music.

The proofs for CRAWLSPACE AND OTHER STORIES are done, back with Eric, so the Kindle version of that (which has the novella prequel to Rats Bats and Vats in it, and the Crawlspace novelette - in the same universe - that I want to write a whole book on, if it is popular enough).

And now, we return to Dog and Dragon. Going to be all hands to the pumps for the next few weeks. B has gone off to a Board Games evening without me.
Posted by Unknown at 7:55 PM