A day with a hookah

I carefully ordered and stuck the new numbers on the Zoo. 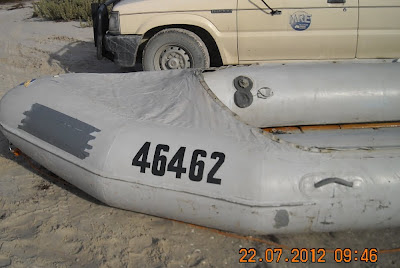 And they have mostly peeled off. It was one of those sort of days. The poor ute was loaded to the gunnals and trundled to Patriarchs and blew up the Zoo (we have a trailer, just need a tire, so slowly we get organised, and soon she can be ready to go, not ready to unpack, inflate, load etc.) 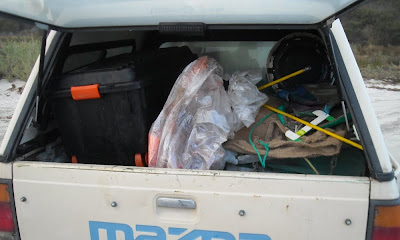 We did have fun doing so, as the instruction were not with us. Anyway got there and back so no drama. Well, no drama except with the little motor (quite adequate for 350 - 450 meters offshore, and she pushed the boat through the waves well - better than expected, actually.) Which would not start... and we tried and tried and tried. Jamie and the other two, with the Hookah, launched and went out. We battled on - got it going after taking the plugs out, after a little adventure with the plug spanner. They do not swim at all well, really. We got out , taking a neat gap through the waves and out. Jamie's GPS was on strike, so we had to move a few times before finding some ground - not our usual bhommies but there were a quite a few small crays in the occasional crack. Nothing quite big enough - I caught 3 I had to throw back and Norm 2. We did find some enormous abalone, but not the best dive. We then came in - Jamie wanted to go to Babel and fish, and Russ and wanted in. We had a good run in but missed the mouth, and could not get the motor to tilt. So we put the motor in the boat - light enough and pulled it the 75 yards to the mouth. Only I tripped and my stormy cape - water sensitive life jacket... inflated. There goes another $25. On the bumpy near quicksand drive out two little struts for the Zoo's floor snapped. The ute battery was flat (from using the electric pump) and so I left the ute and came home Russ (who had to rush) to fetch the jumpers, have a cuppa and and a biccie, and went back. Backed up and waited. They'd had a slow afternoon - only 7 flathead, and got back in the dusk. I managed to get the ute stuck leaving the beach and had to get a tow (quick and easy but still) So... no disaster, but certainly LOTS of drama. Still, no lives were lost, no problems that were not overcome and Norm did get his chance to tell Barbs I have spent the day with a hookah. Maybe I should just have stayed in bed :-) 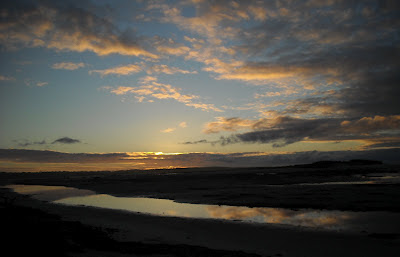