Back, long ago, remote farm-people lived for the post. It brought news. It also brought mail-order goods, and parcels of things from people in places where the shopping... well, existed, or was more extensive than the general store thirty (or five hundred) miles away.

We're quite lucky in that between Walkers, Bowman's, Max's (in lady Barron) and Roberts (with bits at the post office and pub and tourist stuff in couple of other spots) we have quite a range. We even have a dress/fashion place, which of course I'm into every half hour. Um. Sorry, I really am terrible on names :-) you can buy most things on the island. Because we have a rather eclectic cosmopolitan population (that polite speak for bunch of weird people from odd places, even South Africa) you can buy a range att he supermarkets that eclipses most neighborhood supermarkets. Sushi stuff, curry spices, organic gluten free... we have it.

But the post is still much more special than to folk who can shop more widely. It doesn't just bring bills. Today for example brought me a supply of great shed-rags. I have already modified my will accordingly and bequeathed the remainder to my grandchildren (it's an in joke. You have to be here :-)) and a pair of slippers (of 3 ordered) and a box of 10 copies of 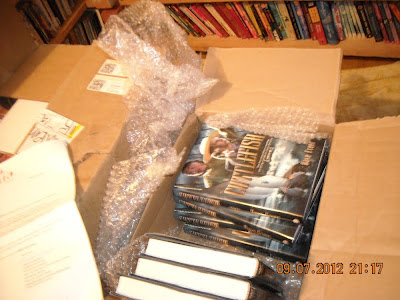