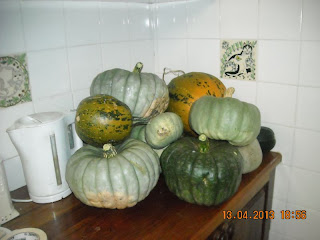 For a guy who doesn't even really like pumpkin... this is an alarming thing.

Oh well, I daresay they will be tradeable, and I do make pumpkin fritters and roast pumpkin is acceptable.

I had two glorious dwan pictures this AM but my computer is fighting with Nikon, so I can only transfer via the SD card - and obviously that wasn't in right, so perhaps somewhere on the innards of the camera in whatever miniscule memory it has are two stuning pics. Went muttonbirding again with Norm - no I don't want any more but it's a lot easier with an extra bloke on the boat. The sea was glassy - unlike it is likely to be now, as the wind is blowing.

I've got the cover art ready to go for my e-book of A Mankind Witch. There are obviously severe limits to my budget, so original art is right out. 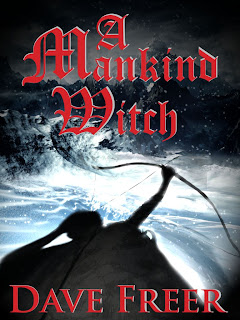 But I am quite pleased with this. It's certainly no worse than original cover.

Which should be up on Amazon by the end of tomorrow.

And I have also planted a lot of kikuyu runners in the laneway next door to the house, which had been badly dried and eroded by the passage of many sheep and blowing a lot of dust into the house. I've got a spray on them and hopefully they'll get going and make a nice green place just outside the fence for wallaby and pheasants and tukeys...

Or I could plant pumpkins
Posted by Unknown at 8:08 PM