We got up at 5.15 this morning to be at the Anzac day dawn service at the cenotaph at Emita, to hear the last post and stand in silent remembrance for fallen soldiers as the cloud-tattered morning brings light to Marshall Bay, surely one the most beautiful and peaceful places on God's earth. I find it cathartic, to remember there some of the things I've been trying not think about too much for near on thirty years.

I have much to be thankful for.

And this particular Anzac day was one that dawned with very little sleep. We'd had a a long promised dinner party the night before. It was something of a feast.

We started with a cold beetroot consomme, served with little buckwheat pancakes filled with shiitake mushrooms, sundried tomatoes, and slivers of cape barren goose breast, sauted in butter. We then ate spiny lobster, and slices of our very own watermelon. Tiny and cool and sweet it actually went very well with the lobster. 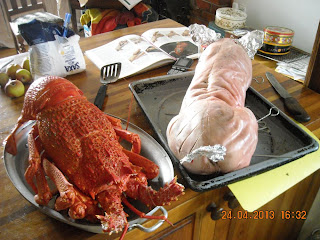 We then had a grapefruit gin sorbet with mint, and then 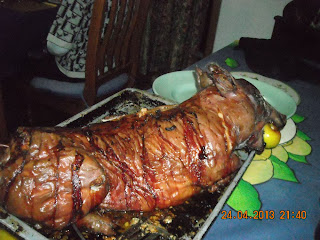 We had chocolate based Pecan nut pie and hoeyed cream for dessert...

Which sounds like a hell of a meal but as 95% of it came out of the sea or garden or was given to us - when you figure on that being a feast for 9 people, and I figure it cost us about $30, I don't think I was too profligate.

We've got a little list of people I figure we owe dinners, but I don't think I can do this more than once every few months... it takes time.


However in a sense of justice - the bore water system (which is what the loo runs off) packed in and I spent some wet time fixing with Norm. And now, with it blowing snot out of your ears if you face into the wind, and raining, I will have to go and fight with it again. Ah well. Country life has its price too.
Posted by Unknown at 8:30 PM