Islanders and our new home 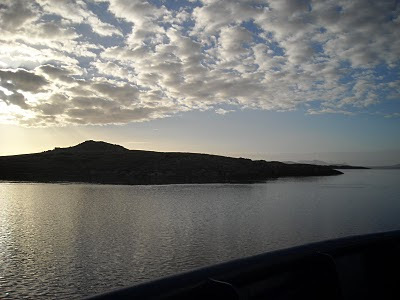 Those of you who are Tolkein fans will understand immediately what I mean when I say our new landlord resembles an Australian farmer Giles of Ham. He has a round cheerful face that's seen a lot of sun and wind, and wore a checked shirt -- he was waiting for us on the quayside when we got in... which was rather nice but might have been nerves on his part. Grin. His mum - who is a honey -- also couldn't retrain her curiousity and came to visit... see we come from Africa... are we... dark? heh. Well, just a little I suppose (All Afrikaaners are, somewhere down the line). But hats off to John he never let that weigh with him. We went to the house, and we too were relieved. It was clean and a little bigger than we'd believed - our furniture is old and large and our old house was too. 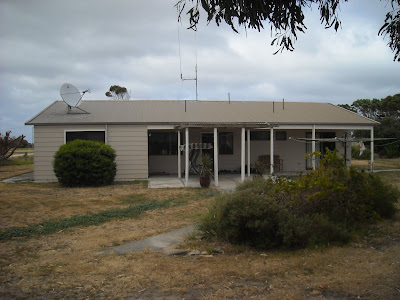 So we went to the local coffee shop, had coffee signed papers... and did not finish up because Service Tas is not open every day. Here on Flinders it's worth waiting for because the lady who runs it is something special, well so far everyone we've dealt with has been. As soon as they find out you're staying, well, you have be introduced. I'm awash with names. Chuckle - they were very impressed that first thing we did was to sign up with the library. I don't think they have realised my profession yet. I'll keep it that way as long as possible - don't want anyone thinking I think I am a tall poppy or something. Anyway, it's one of those places where buying a loaf of bread might take an hour and a half as everyone talks. One of the matriarchs decided I was Dr Bob (whoever that is)and greeted me enthusiastically. I know she has 4 kids now, and quite a bit about them.

Anyway, the NEXT exciting episode of the ferry saga - the ferry dropped us, sailed back with a load of logs and ran aground... at which point it emerged that it hadn't passed its survey and wasn't supposed to be running anyway. It's now NOT running and our furniture is in Tasmania waiting to get here. But we have a home and sufficient crockery cutlery and bedding for now. We'll manage.
Posted by Unknown at 8:21 PM