One of the joys of really long days is I can put in 5 hours work and then still have a reasonable amount of daylight - 11 hours or so to do a little exploring with the boys. - which usually means I can get another 3-4 hours before bed as we're seldom out all of it. Paddy leaves on Monday which will be hard, so we're exploring a little more than I really should (because I am behind). So yesterday we went to Trousers Point (where one points at trousers) - and we had the whole family in the water. 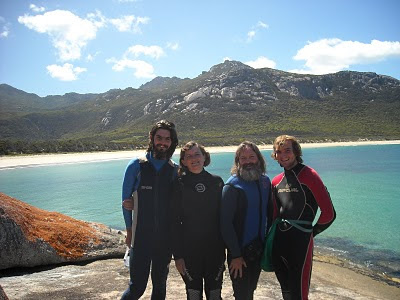 We found our first abalone and saw quite a range of fish... including the most immense skate (or a ray if you prefer - nearly caused a stack overload :-)) like big dirty 2 metre wide dishcloth that kept trying to follow us out of the water. Later when Pads and Barbs were fishing there where wrasse harrassing their baits and lures and the big triggerfish swiming out of holes and caves to peck at the possible food. It was probably about 18 in water and clear as gin (or as clear as one's mind after drinking it.) The waves were as gentle as anything inside a coral reef, and with the white sand and perfect rocky coves you could have been in some tropical paradise not south of the 40th parallel.
Posted by Unknown at 8:40 AM