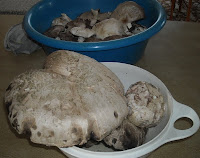 I am feeling a bit like death warmed over, however, unless mushrooms now cause a streaming snotty nose and sneezing, I don't think that eating some of these was the cause. There are rather a lot of them out there - the huge kind that are fleshy and bruise pink down near the creek (which the locals pointed us at, and all the bugs seem to adore), and the ones I tasted the day before yesterday, and we both had some of last night (that's 48 hours since I ate the first, so reasonable to assume they're OK). They are brown gilled, with gills not attached to the stem, with brown spore prints, do not have volvas and they grow in open grassland a long way from any tree so they're not destroying Angels, Death Caps or any Amanita. 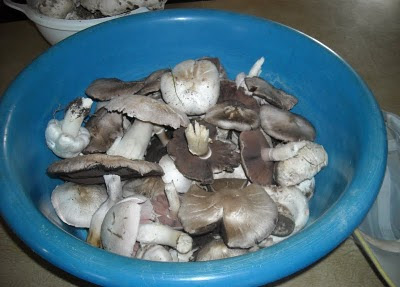 some of these are now drying, others were cooked and frozen. They're all from the field next door. The house was so mushroomy as I fried successive small batches in butter - and it was absolutely lovely, earthy, nutty, with hits of aniseed... just overwhelming mushroomy - that we had to open a window. It actually took very little time (and they cook to next to nothing) as they're very light compared to bought mushrooms (the pink-bruising ones are the opposite - huge and dense and meaty.) I think they're both species of Agaricus (the same as the bought mushroom - which also bruises pink but doesn't get quite as big!)

Olives - in theory they should be due to stop the water-change sequence on Monday and be brined. In practice, the green ones (which should be more bitter) are nearly ready and will be fine by Monday. The black -- eugh. Still very bitter. I conclude that the porcupine was less than effective, as all the greens got a slit cut in them instead. So I cut a slit in the contents one large bowl of blacks (about 1/4 of the total) and we'll have to taste. The woodash lye still have 10 days of water change to go and are still vile. The very ripe in salt... mixed bag - some wrinkled and quite edible, some plump, juicy and... vile. Not salted, not leached bitterness. I pricked them all and put them back in salt. It may not work, but the alternative was a bit like playing olive roulette.

And now I must contrive something for supper. Not containing Olives (we don't have any) or mushrooms (tested pink bruising ones. One slice only, despite being told they were fine by both David and Inge. Advice from mushroom guide - don't mix mushrooms.)
Posted by Unknown at 5:26 PM