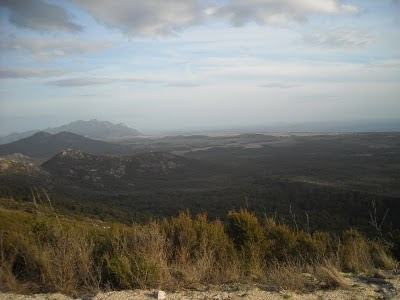 They say if you get high up enough, you can see tomorrow (they also say it helps if you get high up enough really close to the international date-line). Today was a rather mundane sort of day, with a lot of work and not much wild excitement, unless you count killing a few caterpillars on my brocolli. So as the weather is supposed to turn vile again tomorrow, and the writing had gone reasonably well, we took a drive out, up to the highest point you can drive to on the Island - It's only about 8 km away and only 1300 feet. But sea-level is 8km away from Walker's lookout too, and it's in a little bio-island of its own of windswept montaine grassland, just above the montain heath. Sadly we'd left it a little late and the weather was already on the change. You can see the east and west coast, the South, across to Cape Barren and maybe on a clear day the North East River... pretty nearly the island. Only stayed about 3 minutes because it's COLD and WINDY up there. 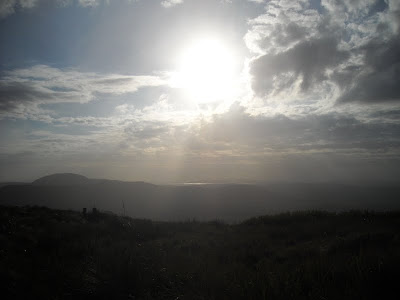 On the way I saw a wombat and two wallaby (one of each species) and dismally failed to get pictures of both. The wombat looked rather like a sumo koala bear having a bad day. We saw more ring-neck pheasant, turkey, and peacocks too. Oddly very few indigeous wild birds but that could be that the others are bigger and look like dinner.
Posted by Unknown at 5:04 PM