We're all here. B is quite sore but back home. We won't know the results for some time but the haematologist was competent and re-assuring. I was underslept with zero focus (surprise) and the lads jetlagged so we took a long walk. 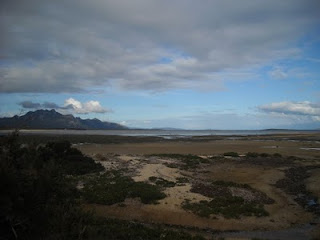 All the way to the little river that comes in next to airport, and past some very tasty looking turkeys (I love fish. Love seafood. but I want a little more bird and meat in our diet. B and I have been talking about the need for some form of firearm, because it seems that they are not really jumping into the cooking-pot all by themselves. In SOuth Africa that involved a million hurdles, and there really was little opportunity unless you were rich or well-connected or a large landowner... none of which described us too well. So we never bothered. Here it is different. I'm a forager. I will do what is necessary. I thought we'd probably trade stuff 9as we did back in SA - It's early days yet of course, and we're still building networks of people to swap things with.)

Then we went down to the point where the black swans were gliding on the water. See those dirty marks on the lens? Those are elegant swans on the calm sea. I really need a slightly better camera to get those sort of pics - on that list of things we need someday. Ah well. We got this far. 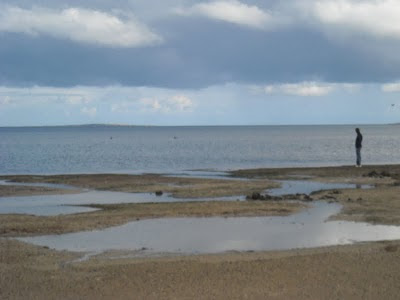 And then we walked back with strange grinding noises - aka Paddy's back-bone and belly-button rubbing on each other. The pic of the boys in a windcut arch on the sandy track next to the beach, where we saw the oystercatchers (I am trying to teach Pads all the few birds I know so that if a certain august personage gets here he can point knowledgably at birds and say 'Green swan. Black rosella. Oystercatcher pie...') 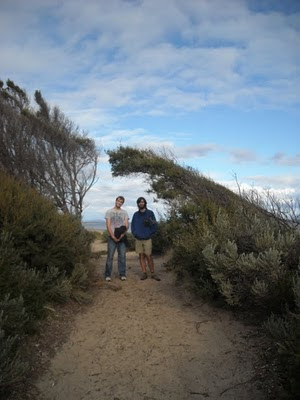 Paddy spent the afternoon writing a programme to calculate the minimum number of moves 'Knights'(a little chess-type logic boardgame) can be done in. Other people might just try and do it in the fewest and count moves... (the programme is fiendishly complex, and James crashed and snoozed, and I spent the intervening time trying to stay awake and work, to fetch B when she flew in, failing, and then racing the plane to the airfield.
I won.
Just.
Posted by Unknown at 8:10 PM