Minced fish and other dark delights 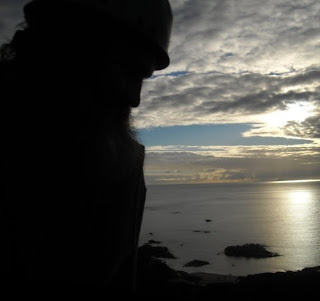 If you're a cat, that is. As a human I am less convinced. Of course the hairy hound from Budapest AKA Roland is also very partial to fish. Nothing like a big fishy slobber to make you feel loved.
We turned some of the wrasse from yesterday into preparatory pet food in the freezer through one of the old fashioned hand mincers - it actually worked really well as the bones either get minced or stay behind. We must have 3 weeks of catfood ready. Yesterday I got to 100K in the book, and we celebrated the lovely weather and that and the Queen's birthday by a trip to 'the docks' which is a remote cliff completely without any docks/dogs/docs in sight. It was a lovely family outing as B said - James and I dived for a bit. Despite the rubber layers the water was serious sinus burn cold - only bit not rubber-coated. It was cold but crystal clear and barely a ripple in sight. We swam into a huge shoal of Australian Salmon and failed utterly to spear any fish with the hand-spear (I didn't take the gun, which I regretted). I speared a leather-jacket (triggerfish) in my determination to spear something... only they're... well, the skin is so tough I didn't penetrate! So we swam on, looking for Abalone, and utterly failing to call B and Pads to come catch these blessed Salmon (B and Pads were catching wrasse, which are now kitty-nubbins, barring the two we had in a green Thai curry tonight. Paddy who doesn't really do curry loved until he had a mouthful of wine - an error of judgement - which burned all the way down.) Anyway we eventually got 2 abalone - could have tried harder I guess, but we'd been swimming around for two hours and I was fairly cold. James decided to check on the Aussie Salmon, before we fished for them... and met a large grey something (probably a shark feeding on them) and got out very rapidly onto the little island and water-walked across to the shore. We tried fishing there anyway, but all I got was a big a big blue-head wrasse. I left James and B to go on fishing and went climbing with Pads. Ergo - the dwarf picture. I've done a lot more trad leading than the boys so I somehow got talked into onsighting a route next to the described one. The climb started delightfully - gentle gradient, pinch-grips and high friction and got steadily steeper, and ended some 30 metres on, with a water-etched granite groove - a little arpeggio of moves on crystals and tiny pinches. Eissh... not much 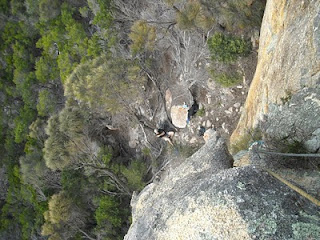 in the way of runners. I ended up in a very wide straddle trying to place a wedge and got cramp. Newton was right, but experience with runner-placement stopped any tragedy beyond a scraped elbow. I had to go up twice more, fiddling out runners in very dodgey micro cracks before trying the thrutch and wobble to the top, and reached up and found a glorious hidden jug-handled hold, big enough to tie the Queen Mary to. So all was well that ended well. The climb is relatively easy and will do well as beginner route, now I know that the roundness at the top hides a wonderful hold.

There is nothing like the absence of dying in the meeting of man and cliff to leave you feeling uplifted... 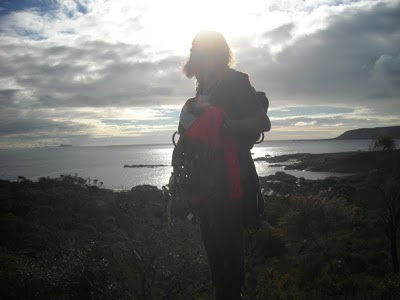 or lifted up anyway. My arms and hands are still stiff, but it was good to feel alive and doing things.

Paddy went to Sing Australia in the evening, and it was a windless night and we hoped for some floundering - but were played false by James's tum. So we came home and I did some work.
Posted by Unknown at 6:01 PM