"I don't want a harp nor a halo not me. Just give me ship and a good rolling sea..."
Fiddler's Green (traditional Irish folk)

Well, we got a call to say the weather was lovely, and Jeremy wanted to take his boat out - She's a 'new' elderly 'chuck-chuckie' as we called little wooden boats with inboards (after the sound of the engines). They're a step back into the past, and it took right back to being a kid playing around on the boat my dad used to fish off - smae smells and feel, same roll on the sea. They're not fast, and they tend to be a bit deeper draft, but they're cheaper to run and well, they feel like something out of a good part of my childhood - like paddling my little flat-bottom canoe along the marshy islands of the Umgeni - chasing mullet. Although I need to work, I also need to feed the family and as it was invitation to me with James as an ancillary... I couldn't just deputise him. Anyway, they've all gone for squid and I am here today, but yesterday was me back in my old element. We slipped the mooring and set off from Lady Barron, out past the fringe of islands that keep those waters flat and out to off Vansittart, where we set a cray pot and briefly kissed a rock -- the tide streams very strongly there.

On the way we met some fellow fishers (for once the damned politically correct is appropriate).

and this is dolphin sliding under the bow. Look carefully. It was that close to us. 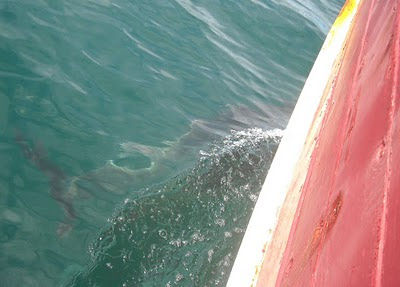 We set a longline for gummy shark -- which I thought (having set numerous lines for Soupfin when I worked on sharks) was kind of small. The anchors weren't. Anyway, then we went off to fish for flathead past the wreck of the Farsund. (look for vansittart on Google earth - you can see the wreck, and there are some stunning pics) 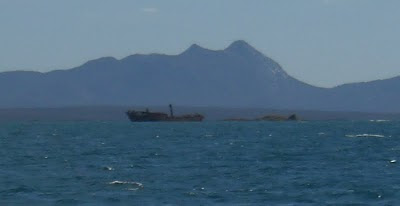 We keep changing the way things are done around here, so James and I put on paravanes and towed lures... James a Yazuri Jig, me a silver spoon. James got taken at full speed - by a flathead. And later again, which was quite a shock to our local expert. And a third time that got off... Then it was handline and drift -- where oddly handlines outcaught our host (who is a good fisherman) on a rod. I guess it depends on the fish and the ground. I also got a gummy shark, which I would have put back but the local though a good catch... So we got a few feeds of fish and went back to pick up the cray pot... empty, and the longline... absent. We spotted one bouy about 300 yards from where we'd set (while discussing diving crays at night and the possibilities of sharks... only the hooks came up empty... and the missing. And then the whole snood missing. And then the 6mm rope... bitten off. The other bouy, the anchor and the rest of the rope had left with a larger shark, I imagine.

We searched for some time but had to head back... and then the engine overheated, in the tricky sandbanks between the islands. So using the outboard on the dingy we had to pony the chuckie home, to drive home past this middle-earth sunset.