One for the Frog 'n Toad

"The frog on the Tyne is all mine, all mine..." Well, the little tree-frog from outside (could easily be same one I evicted from his lettuce, poor fellow) wants to be all mine... or rather he wants all mine to be all his. The log-box is just outside the glass door to the lounge that the tree-frogs regard as the local Amphibian MickyD's ("Just nipping out for a few fries... flies.") Inevitably I suppose some of them have taken to lurking in woodbox - from whence a certain amphibian got transported along with a fire-destined log to the big copper coal-scuttle that serves as a holding point. This seemed a fine, warm, comfortable place to him, until that homewrecker came along to put more wood in the fire.

"There's a frog!" said B, removing herself sideways at something close to the speed of light.

"Where did it go?" I asked, merely (at this stage) relieved not to have made froggy fricasse.

Now the sofa in question is a big old, heavy solid three seater long enough to sleep on. "Why didn't you stop it!?" (I am well-known for my gifted ability to ask really stupid questions.)

B (with dignity) "I thought it would be very happy under there."

With memories of my then 2 year old son James and the cute froggy he decided to keep as a pet in a hole he dug for it in the matress in his cot, and the wonderful bouquet of over-ripe deceased frog we had to search for, I could not agree with this generous sentiment. Down on my belly I peered underthe sofa - a froggy I did espy, Although I doubt that he was looking at me with love in his dewy eye. "Pass me the big brass spoon, Love" (we have a huge old brass spoon at the fire. Probably for making possets of frog or something). My attempt at spooning with froggy merely led him deeper under. "If I move the sofa forward we can tip it."

So with some grunting the heavy sofa was moved, and tipped onto its back legs. Not too far - because there is not that much room. And the intrepid frog-hunter slid his head and arm underneath, while B balances it, by leaning her whole weight on the back.

I've said and done some stupid things in my time. But "It's just hopped between your feet..." probably deserves a Darwin award. 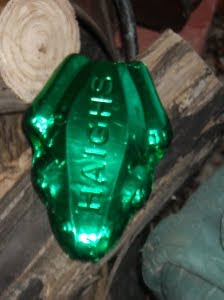 Frog is now returned to cold outer world. Next time I might try roast frog legs. In the meanwhile here is an altogether more welcome green frog from South Australia, which I have allowed to pose temporarily in the woodbox but will happily follow under the sofa. Thank you very much, Ian.
Posted by Unknown at 4:30 PM