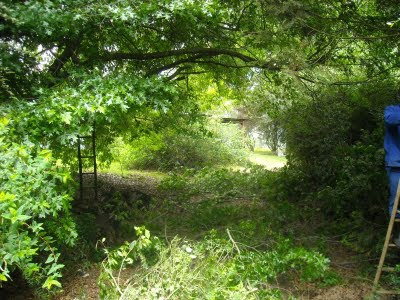 And to follow through with the song -if I could station the convenience above the Mooi River municipality and shower them with my 'appreciation'... I would. You remember that rates certificate that had to in with the deeds office by Friday that they promised - after we'd overpaid them that they would post? well guess what...

They refuse point blank to give to us to let us deliver it by hand last week. They had to deal with an incandescent Barbs today. She got it and delivered it. But of course... the whole thing is now late, rot them. So we don't know if we'll be paid in time. Ah well. It's character building. I reckon if you join B and I's character's together by now... we could build a bridge and walk to Australia on it.

The cut down trees part - we've been cutting a 4.5 metre arch to get the container in. Trust me, in 3 years you won't know it happened - we had to do the same when we moved here - the tree is about 35 metres high and as wide. Oh and Elliots (movers) seem to have lost the plot. Pop-top -what pop-top? (see another 3 feet on character suddenly go up with pilasters and small decorative arches. They promised to get back to me. Maybe they tried. I was up a tree.

So today has not been spent writing but cutting large branches. I really must start wearing gloves for this sort of thing as I have a battered thumb. Thing is rock-climber was up the tree sawing. And gloves are not safe to climb in. On the plus side being 6 metres up on a whippy branch doesn't worry me as long as it is not with a chain-saw (tied on see, and out of fall on and/or whip zone - but falling off with a chainsaw could be deadly.) So the high stuff was done with a bow-saw. This is not that bad as none of the branches were more than 8 inches thick - but I'm going to be an imitation English gentleman all over and not just my upper lip tomorrow. Hot bath time. The worst were the cypress - B wanted to do a branch and had to cut right through. I ened up doing another 4 while she went to tear strips off Mooi Muni. I had to do the same - and finish 2 with a panga. The pin-oak branches were far less tough.
Posted by Unknown at 1:39 AM