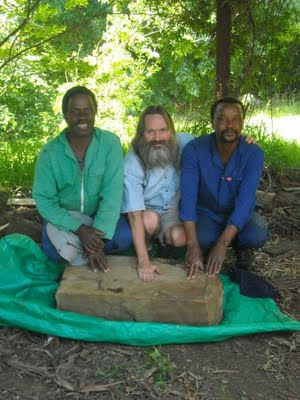 Today... well I managed to get the the old ute started and into the workshop. It's probably going to be sold for a pittance for scrap :-( Oh well. It's 14 years old and been a lot of places. We collected the carpets (having been washed) and tried to find a hinge for the corner cupboard.

And I bleached and scrubbed and polished the family rock. Tomorrow it gets a coat of stone-seal.

The rock... ah yes. It's a handcut block of sandstone weighing I guess at least 400 pounds from Barbara's Great Grandfather's farmhouse in the Drakensberg... from about 1870-ish when that was the last wild frontier still. Cut on the farm, dragged to the house by oxen on a 'sleigh' of a big forked branch. The block was a lintel, leading into the foundations, just below the main bedroom... It wasn't a posh farmhouse, just a comfortable, much loved place, that generations of the family had gone back to. For us... the rock is a repository of much laughter, tears, heartbreak and dreams and even more love that happened there. Of countless Christmases and births and deaths.

Barbs and I went up there probably the most of anyone in the family. It was our dream to get it up and productive again. A lot of hope, and a lot of work. And then the farm was expropriated to become part of a park. They bulldozed the old house. It nearly broke our hearts.

It took me years to go back... but 18 years later we got permission to go back and collect the rock. It took 5 of us and a wheelbarrow (which bent) to move it from the ravage of bramble and wattle where the house had once stood to the Ute. It was heartbreaking... but we endure. And so did the rock. One day Barbs and I and our sons (I will save that bit for when they're there. Besides it will take all of us to move it) will build the family rock into our house, so that it can be a link between the past and future. That it can go on accumulating the secrets and laughter and the tears of more generations.

Yes, I am crazy. But then, that goes with being me.
Dreams and determination, that's us.
We go on.
And the rock goes to Australia. With us and our beasties.
Posted by Unknown at 2:20 AM