What do you mean you didn't know the ferry brought pro-biotic yogurt? I'll have you we also have agric. here!

Oddly, per capita, the island is probably more 'cultured' than Melbourne or Sydney, even if it lacks the gracious finesse of Pretoria (South Africa's world renowned 'snor'* city - and what could be more cultured than that?) and the sheer Zing Za-Za Boom of the metropolis of Kwambonambi. I suppose the island lifestyle requirements make for a rather... shall we say 'eccentric' mix, with the literary hub of Bowman's store, and the little art gallery across the road, and a very lively Sing Australia group, and at least three pick-up bands. The festival in the vines and various functions at the Sports Club and the tavern at Lady Barron are great places for enthusiasm (except for the gothy-emo ones who have a wonderful mix of enthusiasm and carefully cultivated ennui) and wondrous Australian-American accents. You haven't lived until you've the Flinders Island verson of Credence Clearwater Revival, or Dire Straits. Last night we had piano duets and the Sing Australia crew doing a charity event for anti-cancer. I am now so cultured that I know that 'Bait hoven' isn't tossing rotten pilchards overboard. At this rate I shall soon be ready to wear a cummerbund and grace elegant soirées! They let the audience sing at one stage, but after hearing Greg and I they realised what an evil they had let loose, and went back to playing the piano. I liked the Mikado bit though (which I know rather well on account of Rats, Bats and Vats).

And today we went to Birthdays(of several friends) lunch at Vistas - a little restaurant above Trousers Point. They do try to do local food, and their vegetables 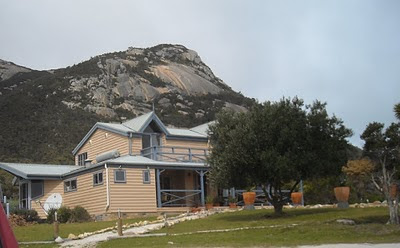 and salad come from the property. I had grilled lamb cutlets (exotic food for us) with a tomato relish. B had a scallop and prawn vol-au-vent with a wine and cream sauce. I'd have said some tarragon to the scallop sauce would have added a dimension, but it was still, for a little two person restaurant, in the middle of nowhere, a very credible effort. Producing 10 different meals, pretty fast, almost all together, is no mean feat. I know, and I had more staff! A lovely meal with entertaining company -- less intimidating than taking my publisher out to a restaurant in Melbourne was.

*snor is a moustache, a requirement for the social elite of the Jacaranda city (without any sexual discrimination, I am sure), aka Tchwane - pronounced chew-on-'e, which therefore may possibly also mean 'moustache'.
Posted by Unknown at 7:22 PM