We HAVE to catch fish! 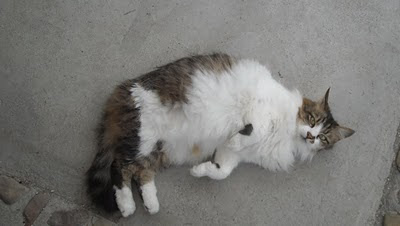 (plz helup am starving kitty. Need fisssssh)
We went off fishing this morning, the tide was 11, and I had to do Meals on Wheels at 12, but we hoped to catch on the incoming tide.

Today was basically the first time since our first week here, that we actually HAD to catch fish. The cats run out of food tomorrow. Not pellets, just the wet stuff. I have not bought any tinned food for them since they got here, but some kind people who were going back to the Mainland gave us an opened tin, so they have had a taste of some Aussie wet food, and loved it. But they have also been very happy with their fresh, frozen, raw or cooked fish, interspersed with a bit of raw squid for variety. But tomorrow the freezer will be bare, of any fish I want to give them anyway.

But, I do not know whether it was the added stress of Having to catch, rather than wanting to catch, but we landed no fish that were big enough to keep. Dave pointed out that if we were castaways, we would not be worrying about size, or bag limits. True, but not a point the cats are ready to accept.

So tomorrow we have to go out again, and this time we really really have to catch, so I am holding thumbs that the wind dies down a bit, and the Wrasse are feeling really hungry by then.
Posted by Barbs at 1:38 PM