Dragon's Ring, and other stories...

Well, you know you've changed worlds when your Doctor drops in after work to check on you. Yes I was, shall we say, being 'bloody' interesting, but this never happened to me before. I was poked, prodded, had my pulse checked, got told to take the one med, forthwith, and told in no uncertain terms to NOT go out (there was a meeting I wanted to go to) and to go without hesitation to the hospital (where they would call him out) if it got any worse. We then talked sf and about India, and stray dogs, and comparitive food for 3/4 of an hour. Yes, he's a nice guy, and concerned, and we've read a lot of the same books... but wow. Different to South Africa. Drop-ins are one of the things I'm coming to love about this place. Maybe because it is an island and really is a community, the way most of the world -- not even rural South Africa, is anymore. It's a bit like stepping back -- in some of the aspects we wish we'd not lost -- 50 years. The technology and the tolerances seem to be fairly modern, for which I am grateful, because 50 years ago they probably would not have approved of my beard, let alone hair - but I'm not even unusual here. Of course we miss our family and friends but it's probably one of the best of communities to try to fit in to, simply because it is still a community. Yeah, everyone knows who you are. Probably not a good place to have a dark secret... In the waiting room at the Doctors, I talked about recipes for fruit-cake with one of our friends, about Gilbert and Sullivan with another, and then chatted about lichen species with a chap with a much bigger beard than mine, and then got to meet the doyenne of the local museum - I suppose wanting (or being prepared to) live out here is a selection mechanism for unusual set of people. Talking through stomach cramps is not the easiest though!

And today a couple more people dropped by, called to find out how I was... not a good place for even pale secrets! I ended up having a complicated debate about CS Lewis's veiws on religion and the history of the Tuetonic knights over lunch (a plain roll for me). I thought I'd be talking about sheep if anything here. Shows how wrong you can be. I'm quite fond of sheep, but it's nice to have some alternate subjects!

My seedlings are popping up here in the study - it's got good winter morning sun. The tomatoes showed the soil deficiencies - I've as a result of the dark green ribs and yellow-green leaves on the Grosse Lisse added trace elements and iron. Oddly the black Russian tomatoes were fine and the Rouge de Marmade mostly fine. The other plants are just germinating (or not) so hopefully the trace elements will give them the right start. I've been talking to them. So far we're merely at threats, but tomorrow if there is not a better effort in the growing department, I might have to make an example of one the Grosse Lisses.

The wind (and intermittant rain) continues today. We hope it clears for the weekend as we're hoping Gary - one of my best friends now living in Canada - gets here. Of course I also hope to feel just a little better by then. 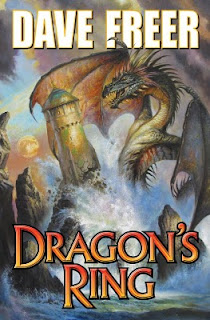 The proofs for the Paperback of Dragon's Ring came in as .pdf - and also my author copies of FANGS FOR THE MAMMARIES (a collection of short stories about vampires in suburbia in which I have a story. Humour) in the post. The artwork is... startling! :-). I am so sorry B didn't open it in front of John-the-Post-Office! It nearly made Dr Biren's eyes pop out, and started the medical students sweating. Actually - the cover is FAR the most shocking thing about the book, but the puns are bad. 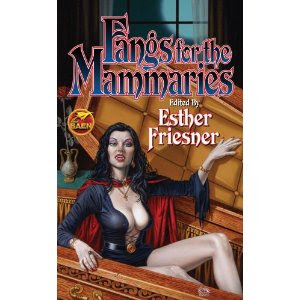