'Has anyone noticed I got razorburn from a kiss from Garth Nix?' 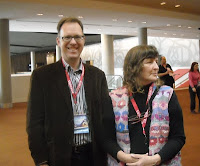 It would be a good title for the picture, anyway... Hard to find a nicer guy for my wife to get razorburn from. Barbs was also her usual multipurpose self. A signing table for Glenda Larke, a driver through the insane traffic of Inner city Melbourne. I refuse to do that. (She even drove Toni (my Publisher) and Howard Taylor and a friend of Toni's and I out to a little ex-pub called the 'The Fitz' for 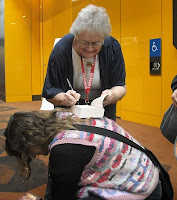 dinner which included Roo (I hear Kanga is hopping mad) which was appropriate, as Fitz is the Hero of RATS BATS AND VATS and THE RATS, THE BATS AND THE UGLY. The experience frightened Howard out of a year's growth, but did get Toni to put a title on a the next book - I am writing a sequel to DRAGON'S RING - DOG AND DRAGON. STARDOGS and the Leewit's tale (with Eric) are also on the probable card.
Of course there were panels and far too many people passing like ships in the night - I never got a proper chance to meet any number of people, and the programming was quite... changeable. But - despite not knowing where we had to be (Yes, I have a brilliant social secretary - when she's not being a signing table or chaffeur, and when the rooms have not been switched.) we had a pretty good con, and did have a lot

of fun in chatting with Mel and Eric, and a lovely dinner too, and caught up with several other friends, Tan, Chris, Morgan, and the barflies - lovely to see you, and made some new ones. As usual I'm bubbling over with new daft ideas. We also did some vital shopping - acquired a drill and some pine nuts and rechargeable batteries and 3 litres of olive oil and some wool, and a heavier mallet for Abalone - much of which we had to post back. There were other fun things - people in interesting costumes (these are the exception, rather than rule everyone imagines. There was one which was the perfect cure for the common cold, on account of if the lady-wearer dared sneeze her VERY low cut and made for less... shall we say, frontage, garment, might have have had a 'wardrobe malfunction' that could have killed with flying sequins. Normally men stare at the frontage for reasons other than fear, and do not back away. This time it was different! And no, no photographs.

And then we flew back over to the island with Kate. Took her to molest chthulhu's offspring last night and to Castle rock, Killiekrankie, and then West End - where she caught her first fish today. I got some abs and we had them fresh Tassie style - one each, egg and then crumbs and fried (not too long), and a fennel tomato and seaweed dish for her tea. She's experiencing the magic of the Isle.