The March of Zucchini And so it begins... The march of the Zucchini.
There is another one that needs harvesting today. The wildlife however is adding a new dimension to it - something had been digging up seedlings, so I set two traps. Well, this time around they caught 2 mice. The second I spotted in the torchlight at about 9.30 pm, when I suddenly relaised I'd forgotten to cover with plastic cups the surviving beans - my night-garden looks like a disgruntled kids tea party, with added nightmare elements as the gut section of the mouse had been eaten. I retreated to put on boots - which I was an idiot not put on in the first place.

This morning there was evidence of a wild and busy deadly night out there. Firstly the gate had been knocked down. Secondly there was a large dead rat in a bloody puddle between the beds. Cause of death - undetermined. Could it have been post- election violence, Australian style? Have I become a sleep-walking raticide? Was this the effect of cannabilistic excess?

The garden is - despite the depredations, coming along. My tyre-tower potatoes are nearly ready for another tyre. 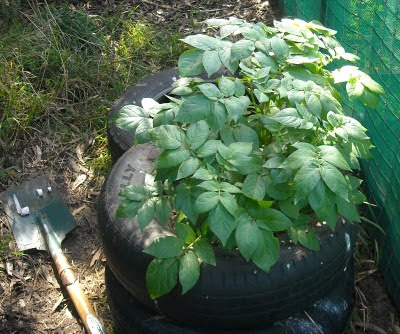 We went to a harvest festival and barbeque on one of the farms on Summer road today. As it was spattering with rain, the entire thing took place in the farm shed. Corrugated iron... and it rained. It was rather like Nottingham Road's annual carol service (held in the sale-hall - with real sheep and calves and any kid under five that showed up dressed as either an angel or a shepherd in with them. Last time one of the angels got her hand sucked by a calf... it was one of few bellows that was louder than the inevitable drumming of the rain on the tin roof). This too was drowned out by the rain that bucketed down. Good thing too: the farmers need the rain, and I was singing. The rain stopped and we cooked snags (see, I learn. They are called sausages elsewhere) - we talked, kids rode bikes (a unicycle yet! I WANT one) a couple of chooks looked in and we were a world away from Africa. Or Venice, that I must now return to.
Posted by Unknown at 4:12 PM