Hunting and the hunter

Imagine, if you can, being out in the sea -- knee deep maybe, but two hundred yards from shore on a 'dark' - a moonless night, a smuggler's night. The looming bulk of Strzelecki mountain blacks out a part of the sky. The rest of it is spiked with a shawl of fairy-light stars, and the sky is so clear that they seem close. It almost looks as if you could poke one of them with your flounder-spear and short out the whole lot. The sea, silent and just about as black as the mountain is lit by four tiny patches of underwater light. We're out hunting the hunter -- and a very unusual hunter it is too. Okay so I'm an ichthyologist so I would think so, but flounders (or soles) are weird with eyes that have migrated onto one side of their heads. They are the hunters of the shallow sand and mud flats where there is no cover and prawns and crabs and shoals of little needle-nose garfish think they are safe from ambush. Not so. The master of camoflage is lurking... and we're out in the dark doing something probably as ancient as humanity, trying to spear fish. 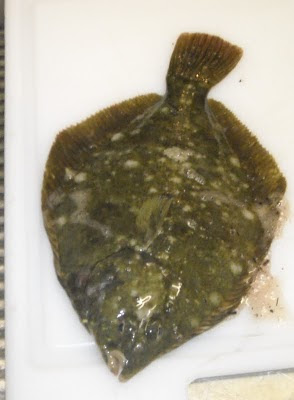 Okay so we're trying an art that was old before neolithic fish-hooks, that was common (and still practiced today)in ancient Greece. We do have an underwater light and not a piece of burning pitch-pine, and, rather than a poseidon-style trident off a Greek vase, a multipronged spear polycarbon spear (although Rex is still using a trident with a wooden shaft). To make up for this we have John-boy turning the light away just as you are ready to spear, and laughing like a drain at your cursing. It's still something humans have done forever, really (probably the turning the light away too). It fits in well to my ideas on self-sufficiency. Besides that there is something really very special about being out in the middle of the bay and having another flounderer come past "how many yer got?"
"Aw, 'bout seventy. n'you?"
"Yeah, 'bout that. It's a bad night."
(needless to say the real score is about 3 at this stage.)
I tried (and failed) to catch the needlelike garfish swimming into the pool of light with my hands. And caught a large swimming prawn... which like the idiot I am, I dropped. Barbs was better at spearing than I am, although I probably have the edge in spotting rocks that I thought looked like flounders.
Then back to gut and bag flounders and have the hot coffee we were dying for... somewhere near midnight we finally crawled into bed.
Flounders tonight for our tea (that means supper in other parts).
Posted by Unknown at 1:18 PM