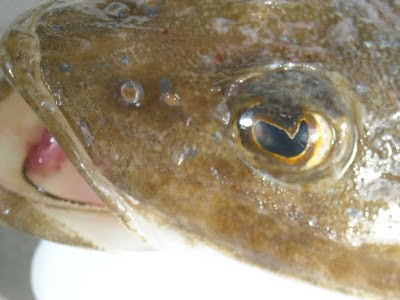 No it's not Sauron. A flathead (one of the Platycephalidae, don't ask me which right now) But all science fiction and fantasy writers should do a little bit of marine work. It would lend a real 'we have met aliens' feel to their work. In some parts they're called lizard-fish. There is no concrete evidence of them ever having been presidents, prime-ministers, or anyone's boss, despite appearances. They're certainly one of the better eating fish, also despite appearances.

Yesterday was quite momentous - I had to take a driving test because the South African beaurocracy is so corrupt that South African driver's licences are not accepted here. Fair enough. The idea of a South African mini-bus taxi driver being allowed to drive (let alone in Australia) is enough to fill me with cald grue. Our local (about to retire) Copper has an interesting task (interesting in the interesting times sense). It hadn't occured to me that as the police on the island are shall we say limited in number and the island is big... and everyone has cell phones, everyone (at least anyone who is up to anything) knows where he is. I was a fisheries scientist working in the fishery of last resort for years. It was full of characters and not a few scoundrels - some nice guys and some scumbags - and several fat rogues who were oily polite to me (and it wasn't up to me to catch them)while they thought they were pulling the wool over my eyes about what they were up to. You do get a little paranoid about being watched. Anyway... I'd love to hear the stories from both sides one day. I bet the straitsmen (the rogues who populated these islands once) are less distant than you may think. Anyway - although I was nervous because in 30 odd years of driving you pick up habits that probably aren't in the recommended manual of driving school style - I passed.

So we went after squid last night and I set a little bait-trap for crabs/shrimps. Barbs proved that now she has the hang of squid, she can catch them - she got 2. I got none - we did get our first crustaceans too. 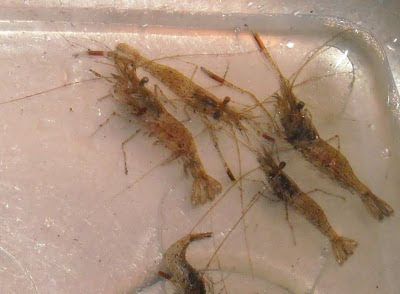 No they're not very big, but you have to start somewhere. I caught about 50. Not sure whether they'll be bait or part of pasta or stuffing for calamari tubes.

We went down early this morning again and we got a trevally and flathead. And the postman brought us some presents from South Australia. Tasmanian Native pepper, bush tomatoes and roasted wattleseed powder. I'm about to have the native pepper on some grilled flathead, and will make Icecream with the wattleseed - possibly not tomorrow... we have an expotition to sea with John.
Posted by Unknown at 5:12 PM