Patiently, silently with hardly a yell to the porters for another Gin and Tonic the great white hunter stalked his prey, his eyes fixed on it as it moved through the undergrowth... (Barbs, approaching quietly from the rear) "What on earth are you doing?"

Me - still on my aching haunches peering intently at grass-stalks. "I saw one of those jack-jumpers on the kitchen veranda. I'm trying to follow it to its nest. Need to find it before Chris's kids get here."

"Oh. So do you actually want a gin and tonic? Because we don't have any gin. Or any tonic."

I lost it at the bottlebrush tree, having painstakingly followed it across 10 yards of grass. Fortunately Barbs found the nest - and some bigger bull-ants (I think they also have a toxic bite) today when she was mowing - about a yard from the bottle-brush, as plain as could be. Normally I'm pretty live-and-let-live, but 5% of people react very badly to them, and with kids I am not prepared to take a chance.

The island is small enough that, if you can deal with getting up early enough, you can see dawn over the ocean and sunset over the ocean on the same day. I wasn't that heroic and all I saw this morning walking back was this. 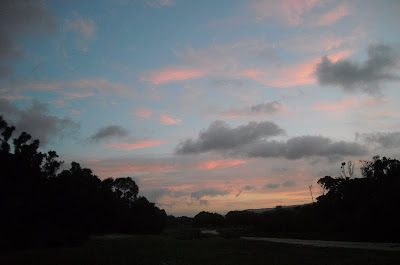 Sadly -although I took a torch down, the tide was still covering the flats, and the wind-chop made wading and looking impractical. And cold. Did I mention cold? And wet too. What a woos I am. So I came home, before the first signs of the election today. By next time I hope we'll be able to vote. I'm still faint but persuing with Australian politics, but I am looking forward to it.

Someone asked for a picture of the house so here it is. 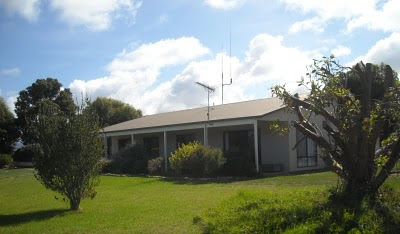 Not exactly Finnegan's Wake - but houses like that are probably once in a lifetime experiences (Finnegan's Wake was built by an Irish cabinet maker called Murphy as his dream house. It was built on a sinstral spiral and had very few straight walls, most being curved). We're renting it until we buy and build so... we'll see. In the meanwhile it's well built, weathertight, roomier than we expected and, most importantly, we have a home. A place for me to write, and a base for us to explore from.
Posted by Unknown at 4:00 PM