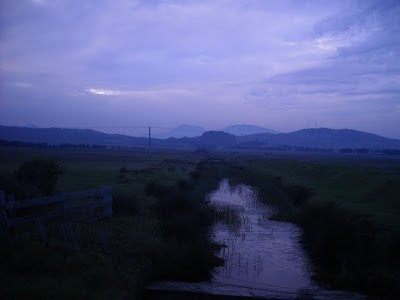 Someone (naming no names) omitted to tell my legs that this getting fit idea involved them. Actually, that same someone also forgot to mention how hard it is to get out of a nice warm bed, from next to cuddly wife to go out into the pale predawn and take a brisk walk. I'll find him one day (this someone) and we will have words. Anyway, as you can see by the picture I did this thing. It's about 2km down to the beach, and a lot of it is down a little back track.

There was a spectacular lonliness to the beach - Mr Somebody had obviously forgotten to tell anyone else. The sky was grey and overcast, and the tide was already fairly far out. The diffuse soft light made it look like the opening shots for one of these angsty movies... except they would have some gulls or peewits or some fowl creature doing haunting cries, or played suitable mood music. Instead we had the Black Oyster-catchers making noises like off-pitch elderly cricket phones. I'm a biologist and a forager (and I am never too sure which trumps which) so sand and mud-flats and low tides hold a fascination for me, and I put the fitness walk back on hold for a wade-and-fossick. The sand above the tideline was suspiciously dimpled. Now sand patterns are caused by the washing of the waves... and the sea, well she has no sense of humour. A very serious thing is the sea, and don't you forget it. She'll leave ripples or fans or layers on the sand yes, but dimples no. Dimples mean something is living there, and neither the biologist nor the forager minded me digging. I like to understand these foodwebs (because what looks like desolate mud is a seething arcology of life. Some of which you don't want to eat, and some which you don't want to know. Digging and sorting produced some tiny wedge shells - too small for dinner for me, but considered utterly yummy to some tiny pea-crabs (which should maybe be called p-crabs (you have p-plater drivers here in Tassie), because when they get bigger they'll be crabs. At the moment they're just greedy clam-eating hoons, so busy scoffing the free grub that they didn't even notice me pick the shell. When I put it down they were very embarrassed and shook down into the sand, just eystalks protruding. So I left them to get over it and walked on. The shallow water is full of little pimple-mounds with holes in the top, that something must live in. There are different burrows in between, and every now and again, scooped out basins of slightly deeper water, with scatters of shells - stingrays methinks. I need to get down there earlier, with a torch. Yes, now that you mention it, a lot of people do think that I am barking mad. This is not true. I leave all the barking to Roland -Old English Sheepdogs just do it better.

I lifted some drifts of seaweed from pools saw a couple of tiny translucent shrimp shaking their nippers and yelling "Homewrecker" at me before I put it back and walked back through a few spatters of rain. There were snails out on the driveway - I didn't have to walk to the beach to find molluscs, so it thought I'd better check the veg before settling in to write. The mouse that had been digging up my pea-shoots had had me set a trap inbetween them.

Unfortunately, he must have brought big brother along, because the trap was conspicuous by its absence. And to pay me back for my impertinence, it had dug up a round dozen broad beans that had just germinated.

So: Once I found the trap (on the far side of the garden) I planted some more, and went back to my desk job. Spies in 16 th century Venice right now. Talk about shifting worlds. But it's actually come out well this morning so maybe the walk did me good.
Posted by Unknown at 12:51 PM