Homes and other people's gardens 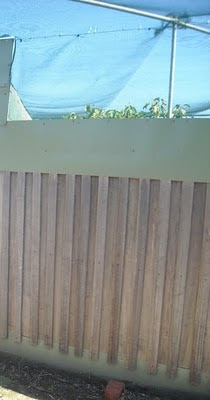 Ok perhaps I exaggurate just a trifle, but with dug in wombat proofing, wooden pallisade wallaby proofing, a metal slide rim for the possums and a final bird-net layer, there are less secure houses in Johannesburg. It was a fascinating trip around some very impressive gardens. In a nutshell (or at least Fort Knox) - you can grow almost anything on Flinders (there are soil issues, and bugs etc, but it is a temperate climate, which is not too extreme.) But there are a lot of volunteers eager to help you with redistributing the produce. It was fascinating however to see the different approaches - and levels of success in different people's gardens. I learned that soil can be over-enriched, which I hadn't known, and saw several neat ideas. The trip was also fascinating for the inveterate people-watcher like me, with a cross section of islanders who grow veggies - from the humble back garden patch to things that cost more than your average family car to set up. A frightening number of them said "Oh you're the new South Africans in John's place." I began to feel a little like the new giraffe at the zoo, only less interesting. We'd been told to bring a 'cut lunch'. I was good. I did not explain that we Africans liked to cut ours fresh, and could we have the attendees list to browse over. It was time away from the desk and writing, but worthwhile in terms of learning what would grow and what we'd have to do.

And what not to do. Heh. Local wisdom has it that you bury a dead critter (sheep, wallaby, feral pig) under each fruit tree. The vivacious owner of a large and struggling orchard/garden describing the process... "you know, legs and arms coming off and maggots spilling." Fancy some fruit from that tree?! At least we savages butcher our enemies on the spot before burying them under the corner posts of our buildings without having to drag disintegrating bits. Anyway Josh Byrne assured us this was a bad idea and anerobic fermentation would have a detrimental effect on the roots, to say nothing of the acidification of the soil from all the puking at the bouquet and charming sights.

This one however was a life lesson to me. 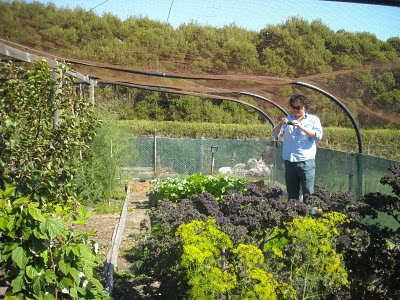 It was probably the best and most productive of the gardens... and a charming lady of 96 kept it... by herself.
She also teaches Scottish dancing.
Posted by Unknown at 7:09 PM