For the cat owner who wants everything of best for their darling putty-tats. A new startling reality channel... Our three were utterly rivetted to the box, watching it this morning. It took me a good 15 minutes (I was making rolls, slice etc) to work out that actually they were watching the glass of the combustion stove, intently, and not the TV which wasn't on, anyway.

They looked for all the world like three ladies glued to their favourite soapy.

There was a starling inside the combustion stove fluttering in front of the glass. (it was far too warm for a fire).

I was able to just open the door a crack and reach in and grab him, before the next inevitable act in the little drama took place (ergo, a cat - trying very hard to wriggle past me, into the ash... and a sooty bird whizzing around the white curtains (John's not ours. We would never buy white curtains) like a sort of demented ash-bomber. Anyhoo, it didn't happen, and I was able to liberate it outside to ash-bomb its gum tree and fellow starlings.

The cats were very disappointed in me.

I had to get some ingredients so I zigged into town and did a drop in on Bill (and my new hairy girlfriend Molly - a great Dane cross Irish wolfhound) - who has a device I sorely envy - to whit an electric knife sharpener. I have to admit I'm useless at sharpening knives. Some people have it, some don't. I don't. He also made my day by giving me a rocking knife board. We'd hunted Melbourne flat for one. For cutting fresh herbs, there is nothing finer. 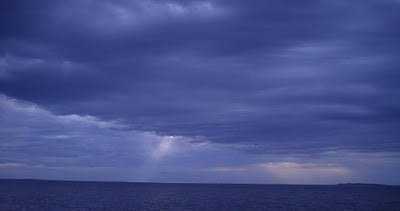 It has been the hottest day I think we've had on Flinders -- the kids went swimming off the pier this evening. We went down to try for squid (the tide was past, but the weather was Sultry. I got a couple, but it feels like we're in for the mother and father of all storms. I was informed the Barometer is falling fast. Got to catch it!
Posted by Unknown at 8:51 PM