We have a new convert! 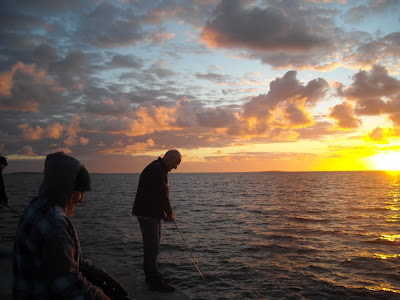 We went down to the wharf for squid tonight.

A new island resident joined us. And having told us that he had done river fishing, but had not fished in the sea before, proceeded to catch more than anyone else on the jetty. I wonder if he is a poker player? Or if it was just beginners luck? Or his dayglo pink jig? But whatever the case, we all had several chuckles, (especially as he learned never to look a live squid in the eye!) and we came home with some squid.

I think we have hooked a new convert into the fine art of squidding.

He has also learned to gut them, now he just has to eat one, to compare it to bought calamari.
Posted by Barbs at 8:48 PM