Back in the bad old days before the internet, and even before fax machines, the people of South Africa had a serious issue with the lack of refrigerators too. Depending on your culture this got dealt with in different ways. The black migrants from the north tended to live in groups - for defence against against other tribes and the indigenous Khoi-san people and the wild animals. When you killed it got shared around and everyone got some and hopefully before it went bad, you'd get some more. The white settlers from the south lived in smaller isolated families and brought drying salting and vinegar cures with them from Europe. We don't know a lot about how the Khoi-san - especially the hunter-gatherers coped. We have stories of them gorging vast amounts of meat when it was available, and going a long time on lean rations and, apparently by boiling up dried skins - presumably wind and smoke dried. Somewhere down the line the early trek-boers (who had a fair bit to do with the Khoi-san) mixed the air-drying with the salting so that meat could be kept. At first this was probably nothing more than salt on on strips of meat cut with the grain. It would have been dried in the wagon or under the eaves to the point of being as hard as a board. It was almost certainly reconstituted much the same way salt cod is, and used to make stews, probably when things were pretty desperate. Inevitably someone must have got to eating some that wasn't quite so hard, without bothering to cook it first. After all air-dried pork and mutton and even beef are eaten this way in Europe. And somewhere down the line they started 'improving' on the basic process. Vinegar got used to kill any spoilage starting, and that meant you could get away with a little less salt. Sugar - used in bacon cures, makes for a more pliable meat. And of course spices helped to make it more tasty and probably helped hide some of the dodgier flavors. Being on the route between Europe and India, and with the Cape Malay slaves brought in by the Dutch, some of these are quite heavily used. Coriander (which the rest of the world sprouts and uses as Dhania or cilantro) is roasted and used quite a lot, and along with black pepper is the trade-mark of this dried meat. Here is a recipe. It tends to be made with beef, or game, or Ostrich. I've had shark biltong too, but maybe that one is best left forgotten :-) It's become a form of south African food that unites most of people there, and they can get nearly as excitable about this as they do about cooking meat on a fire -AKA 'braaivleis' or just 'braai' (which I may assure you no two South Africans agree about, except that everyone else in the world does it wrong. And doing over gas is just evil.) 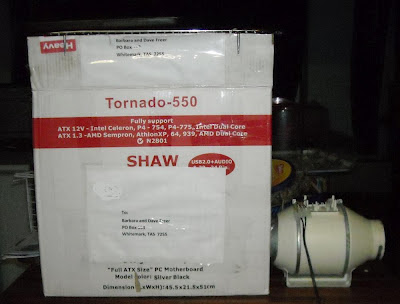 My first batch of wallaby biltong is drying. I wonder if it will be the last... 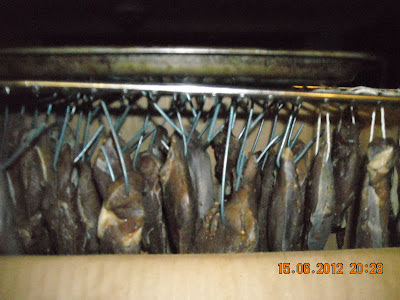