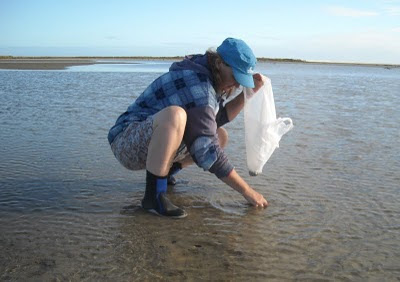 There was an early morning low tide this morning so we went to collect some clams (don't ask what species, I don't know, and neither does anyone else. Katelysia sp. at a guess - but they're quite small.) Anyway, the regulations allow us 100 pipi or clams or 200 wedge shells and don't seem to specify exactly what species they are, and there seem to be a bunch of Katelysia species living in that habitat and a few other species I really HAVE to find out what are and exactly where live. I'm a very selective predator/forager who believes very firmly in variety and leaving plenty for tomorrow. The locals have told me there are no clams here. And no mussels. And no oysters (well maybe in the North-East River - the North-East River is kind of like a mythical distant waterbody of Eden with EVERYTHING. Heh. It's maybe 50 Km away - and a good fishing spot. But I don't think it's the biological lost world. I think that's a lot closer - like all around here.) 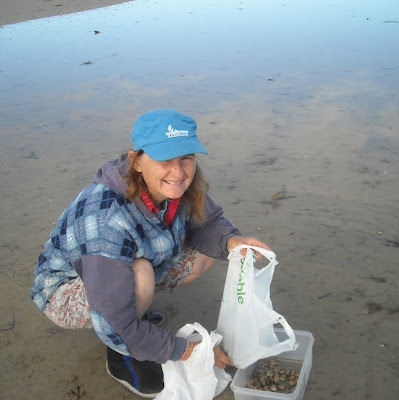 It was a nice low tide and we got our bag limit quite quickly with minimum immersion in very cold water.

I took a few minutes to see if I could catch some mullet with the cast net. 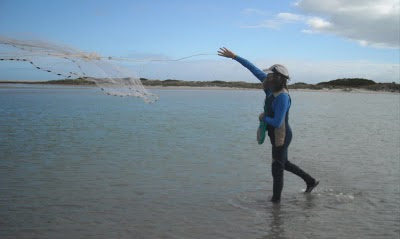 I'm not heaven's gift to this - I just like it as a very visual way of fishing - see your fish-shoal and throw at them. Miss (mostly). 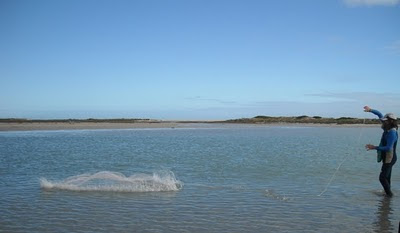 Well, that's the theory anyway. I caught 3 of these cute little flounder that I certainly never saw. Was fascinating putting them back and watching them vanish into the sand (I really need video clips of some of this stuff). And only 2 mullet - both under the 25 cm size. That's big for a shallows thrownetting mullet. I saw lots of very tiny ones but no major shoals of medium/large fish. Oh well, more things to find and enjoy finding. 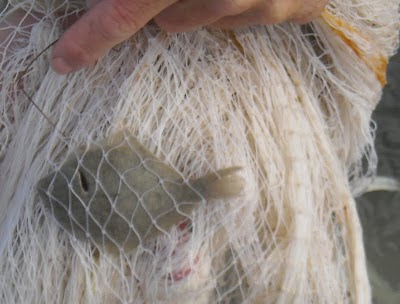 Driving back past this incredible watercolour landscape

We saw some wild turkeys - about 25 of them. If they hadn't been in someone's else's fields but on the roadside I might have been tempted to try thrownetting them. I wonder if that is legal?
Posted by Unknown at 5:23 PM