I am of course (as everyone knows) a brilliant gardener, throwing vast amounts of energy and ignorance at this, and making one spindly little plant sort-of grow where four flourished happily before I started mucking about. Well, to each of us our talents... 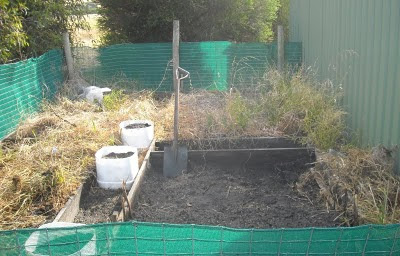 Fortunately there was an established veg garden, with windshields. Unfortunately it hadn't actually been gardened in some time. So day one I started on the first bed, adding moderately elderly manure from the cows next door (and starting the compost heap).

Aside from assualts from CEDDY supporting birds, (which I may have maligned. It might have been after snails and just too enthusiastic.) said snails, grasshoppers, and my gifted gardening skills (usually involving successfully rooting out leeks, under the idea that they're grass and nurturing grass, thinking the leeks are doing well, as an example of my genius) we have, after a month (which isn't long in garden terms at all) some things ready to start eating the thinnings anyway.
Herbs - I have parsley, thyme, and fennel and a Jalapeno chilli(need sage, rosemary, oregano, and basil (but too late for that, I think)) and the most enormous lavender was growing here anyway. The mint refuses to even try and germinate, drat it. How is something so pernicious as a plant, so finicky as a seed? I know, otherwise the world would be knee deep in mint. I've also got 5 rhubarb plants (Victoria) going - which is probably enough rhubarb to give six elephants stomach-music. Then we've 3 volunteer tomatoes, one with a tomato, cucumbers (maybe I'll get gerkin size fruit, 2 types of zucchini (and the first zucchini is almost ready to come off) lettuce- iceberg (flourishing) Reine des'glaces (not flourishing) and red and frilly stuff(suffering from CEDDY attacks), green beans, Chinese cabbage, broccoli, beetroot, silverbeet(swiss-chard, nearly ready to start harvesting), Carrots and spring onions, and of the planted-too-early-but-we'll-see parsnips and spinach. Oh, and leeks. The few I haven't pulled out. Potatoes I planted in tyres outside the beds, and they're sort of growing... who knows. 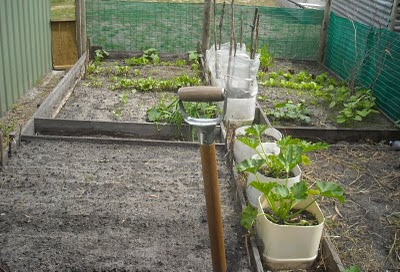 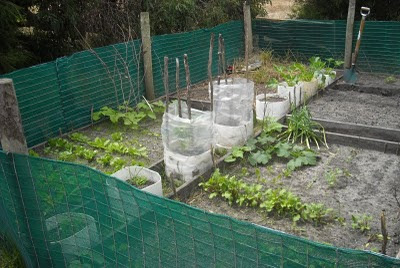 I still have one raised bed to go, but we have made some progress in spite of me.
Posted by Unknown at 8:12 AM