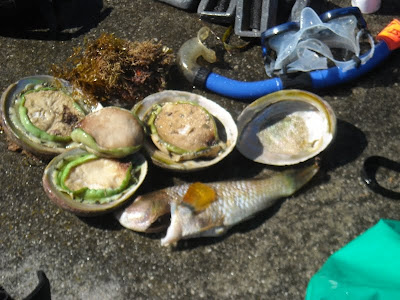 With food prices really rather high here in Australia (compared to SA) and still higher on the island, and being determined to start off the way we want to continue, we had a good tide, and good weather this morning so we took ourselves to the rocks to dive for Abalone (me) and to fish (B). In Dave's theory of self-sufficiency (which is a rather Rube Goldberg theory, held together by bits of string and powered by wallabies on a pogo-piston) foraging has a pretty important role - because it conveniently bypasses my shortcoming as a gardener and my non-existant skills at animal husbandry (Which I reckon would have the entire animal farm sueing for divorce.) A good foraging session is at least partly opportunistic - because fish, shellfish, game, mushrooms and field-food are relatively hard to gaurantee (rather like my veggies) - but if you have some grasp of what you're doing, where you need to be and when, you will hit real larder/freezer fillers from time to time. Of course that's not how fisheries regs work, but they're still generous enough to allow us a varied stock up.

There is just one minor detail - without local knowledge you can be wasting a lot of time and energy. James and I spotted quite a lot of Abalone off the back of the island off Killikrankie. I was surprised at the time as it is quite close to a popular holiday spot. Still, better than looking blind (and the abs we'd seen off Trousers Point had been smaller and scattered.) And I am free-diving, no aqualung and old age so easy dives are popular. B and I swam across - well I waded - my weight-belt is just a little too heavy and designed to get me down. We floated a crate with us with reels and tackle and drinks in. Got about a third of the way and Barbs said "I'm moonwalking." That's where her similarity to Michael Jackson ended though. Floating in her wetsuit she swam and I walked. We got over and I put on frog-feet and started diving. The abs were there - I did waste a lot of time looking in places they weren't and hoping I'd see a lost crayfish. Alas, no such luck. I really need a small fortune for that underwater camera for the blog (and a dive-bouy to tow things like a speargun and a bag -But more anon). The fish (some of which looked like dinner and some of which looked like they really deserve a role in one of my sf books.) in colours startling and vivid... and camo shades suddenly appearing in shifting forests of seaweed and then vanishing like shy beasts in the next movement. There are mobile ribbons of spangly little fry-fish everywhere, and the ichthyologist aspect of me wants to know what they all are and all the intimate sordid details of their family history (Ichthyologists are like that. They're mostly harmless otherwise). I was being hyper cautious, because dive alone = die alone, and I don't know the local currents or even bad places or beasties. Anyway, no disasters. I found that most of the abalone were a bit undersized - hence them being there. I did have 5 of my 10 quota, which I suppose for a newbie wasn't too bad. I was a little disgusted with myself but after about 2 hours (a lot of which spent in the wrong places), I was just too cold. B added one wrasse just over the 30 cm limit to the larder. I should have fished or taken the handspear out but... the tide was pushing and I was cold. So we set out back... me with the 5 abs and the fish and my weightbelt. So coming over I'd applied river-crossing logic and led us across the widest possible point. B was convinced I did this to get her wet... So we went back the narrowest point. Like in rivers this is current scoured and deepest... B in a wetsuit with no extra bobbed along swimming happily (incoming tide, no worries - you're going in. . Me... I was sinking. I had to let my wife swim on and get my fat-frog-feet on or we'd have the embrassment (not to mention other problems) of ye tough careful diver in all his kit, drowning (OK unlikely - I can swim and I was probably not more than 15 yards from standable water and only chin deep where I was. And I could still have dropped my weightbelt, and stuff in my hands) Lesson one. Abalone weighs. I think a bag and bouyline might be a good idea for ten.

Coming in to the shallows - with the white sand and clear sea it looked very tropical - I saw shoals of silvery fish I assumed must be mullet shivering the water just behind the shore wash. I got rid of weight-belt, abalone and big frog feet, fetched the throw-net and had a happy half hour of cast-netting. I caught (and released) quite a lot of mullet. I'm near certain no one had ever thrown a net at them, as they let me get quite close. Local regs are 25 cm to a mullet and most of these were too small. I'd have eaten 10 over a barbie (Braai, Cathy, braai) quite cheerfully back in South Africa. But local rules have to be played by.
Anyway, we came home beat the abs, washed the bits of abalone off ourselves and have some more meals in the freezer. It's not really cost efficient or self-sufficiently effective (protein about 4 meals - I reckon on a good forage being meals for about 2 weeks - beacuse it won't always be good, and trading your surplus is very much part of this lifestyle. I got a squid this evening to add to it, so it's nearly a week's food.
Posted by Unknown at 7:10 PM